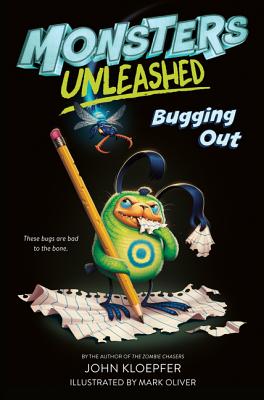 From the author of the popular Zombie Chasers series comes the second book in the hilarious, action-packed Monsters Unleashed duology.

The only thing worse than monsters? Bugs. Billions of them.

Just when Freddie Liddle thought he could catch a break, a new kind of terror infests his town: slimy, disgusting, man-eating, self-replicating bugs. But these aren’t just any pests—these bugs were 3D printed by Freddie’s classmate Trevor, and they’re stronger, faster, and meaner than any other insect on earth.

Now it’s up to Freddie, his new friends, and their pet monsters to stop these bad bugs before they devour everything in sight. The kids start crunching, stomping, and smashing, but as the bugs get bigger, the chances of winning against them get smaller.


Can Freddie and his friends get the creepy crawlers to buzz off before their town goes SPLAT?


Praise For Monsters Unleashed #2: Bugging Out…

Praise for the Zombie Chasers series: “Kloepfer’s first is a Zombieland for the middle-school set: funny, off-color and extremely gross. A great pick for the child who thought Diary of a Wimpy Kid just needed more motile corpses.”
— Kirkus Reviews

Praise for the Zombie Chasers series: “If there’s an award for the grossest descriptions of zombies, Kloepfer would win it. Preteen boys will love it.”
— St Paul Pioneer Press

Praise for The Zombie Chasers 2: Undead Ahead: “Written with tongue firmly in cheek-and other body parts all over the landscape-this book will appeal to reluctant readers, particularly middle school boys.”
— School Library Journal

Mark Oliver likes being an illustrator because he gets to paint, draw, and use his creative genius in many different ways using a computer. Sometimes he does it so well, he wins awards for it (the Stockport Children’s Book Award in 2006 and 2011, among others). Mark’s very clever, but he never brags about how clever he is, just in case people ask him tricky questions about zombies, string theory, or moral relativism. Visit him at www.olly.net.
Loading...
or
Not Currently Available for Direct Purchase