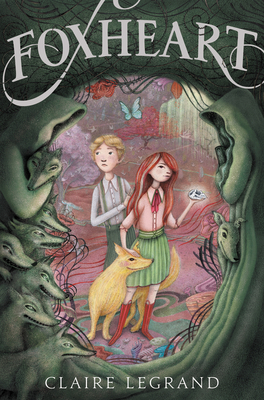 “Heart-pounding adventure, a commitment to remaining true to oneself, and deft storytelling distinguish Legrand’s epic action-fantasy. ...Legrand digs deeply into the need for (and power inherent in) connection and the friendships forged by shared adversity.” — Publishers Weekly (starred review)

“Claire Legrand’s fantastically spooky The Year of Shadows will keep you turning its pages well into the night, even though the floorboards are creaking and funny shapes lurk in the corner of your eye.” — Anne Ursu, author of Breadcrumbs

THE YEAR OF SHADOWS: “Legrand has created a horror-tinged tale of triumph over loss and the destructive nature of hopelessness, that is full of well-rounded characters, a spooky gothic mood, and eerie glimpses into the past lives of the ghosts.” — ALA Booklist

“Snappy dialogue and creative fantasy elements-bloodthirsty unicorns, a dragon who collects teapots and is scared of ghosts-will delight seasoned fantasy readers, while the power of friendship between Girl and Fox gives the story depth.” — The Horn Book

“The beating heart of the story...is the bond between Quicksilver and Fox...Those touched by the girl/wolf story in Rundell’s The Wolf Wilder will be drawn to the theme and find a similarly strange but successful mix of wit, pathos, and action here.” — Bulletin of the Center for Children’s Books

“Legrand fills her story with magic, danger, and suspense, and places two fiery female protagonists at its helm. ...Give to readers looking to go on a fantastic adventure.” — Booklist