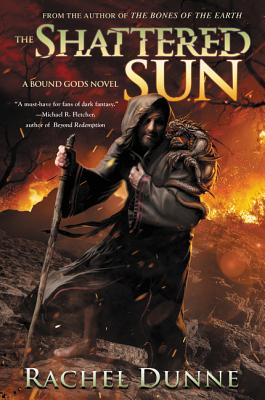 The epic sword-and-sorcery adventure of the Bound Gods fantasy series, which started with In the Shadow of the Gods and The Bones of the Earth, comes to its dark conclusion in this thrilling story of a vibrant world whose fate lies in the hands of vengeful gods and bold warriors.

The world has been plunged into darkness...and only the scheming priest Joros might be able to bring back the sun.

With his ragtag band of fighters—a laconic warrior, a pair of street urchins, a ruthless priestess, and an unhinged sorcerer—Joros seeks to defeat the ancient gods newly released from their long imprisonment. But the Twins have champions of their own, and powers beyond knowing...and the only sure thing is that they won’t go down without a fight.

The fate of the world hangs in the balance as the Twins aim to enact revenge on the parents that imprisoned them, and the world that spurned them. The Long Night has begun, and the shadows hide many secrets—including that the Twins themselves may not be as powerful as they would have everyone think.

Joros and his allies must strike now—before the Twins can consolidate their power...and before they are allowed to shape the world in their vision.

“The final volume of the Bound Gods series is a tense and satisfying conclusion to the fight to save the world.” — Booklist

“Series fans will be rewarded by the powerful conclusion.” — Publishers Weekly

“Dunne’s debut novel is visceral grimdark fantasy with ruthless religions, deeply conflicted characters, and a bleak, hostile setting. This trilogy is off to a gritty, gutsy start.” — Beth Cato, author of The Clockwork Dagger, on IN THE SHADOW OF THE GODS

“The gods have brought this group together - but which gods, and to what purpose? The interesting concept will keep readers involved as the story gradually unfolds. Dunne’s polished prose and well-rounded characters make it a strong start.” — Publishers Weekly on IN THE SHADOW OF THE GODS

“The gritty mythos and conflicted characters are compelling enough to bring the reader along to the last page...and to the coming sequel. Antiheroes carry the day...in this dark tale of pragmatism and survival.” — Kirkus Reviews on IN THE SHADOW OF THE GODS

“Joros is an interesting character, full of suprises to both readers and to those around him, and able to draw others to himself while maintaining some mystery. This novel is full of battles and blood, but never loses the heart of the story amidst the chaos.” — RT Magazine (4 stars) on IN THE SHADOW OF THE GODS