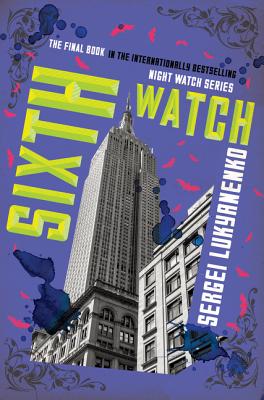 They live among us. They fight among us. They’re the Others, a supernatural race of magicians, shape-shifters, vampires, and healers. Divided into the Light and the Dark, these rival factions have spent a millennium under a reluctant truce. Now, however, both sides must unite against the ultimate enemy.

A Light magician and high-ranking member of the Night Watch, Anton Gorodetsky fears nothing. But lately the threats are mounting. A reincarnated vampire has been terrorizing Moscow. His daughter’s school is ambushed by a bizarre chimera. And the Prophets have all reached the same chilling conclusion: The world will end in five days.

To ward off the apocalypse, an ancient council called the Sixth Watch must be assembled. After both Light and Darkness select their emissaries, Anton must enlist the unwilling aid of the four other Great Parties: the Vampires, the Witches, the Form-Takers, and the enigmatic Foundation. Journeying from Russia to Paris, the Alps, and New York City, Anton comes in peace—but he is prepared for war. For if he fails, none are safe.

"Lukyanenko’s vision of a bustling supernatural world that’s just out of sight is just as wryly bewitching as it ever was, and there’s a real sense of warm familiarity to the characters. . . Lukyanenko continues to blend roaring fantasy action set pieces with an engaging collection of blue-collar heroes working to remind these beings of their better natures." — Scifinow.co.uk

Sergei Lukyanenko was born in Kazakhstan and educated as a psychiatrist. He began publishing science fiction in the 1980s and has published more than twenty-five books. He lives in Moscow with his wife and son.