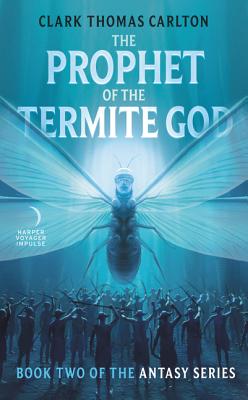 The Prophet of the Termite God

Book Two of the Antasy Series

The powerful Antasy saga continues with The Prophet of the Termite God, the exciting new chapter following up on Clark Thomas Carlton's epic fantasy novel, Prophets of the Ghost Ants!

Once an outcast, Pleckoo has risen to Prophet-Commander of the Hulkrish army.  But a million warriors and their ghost ants were not enough to defeat his cousin, Anand the Roach Boy, the tamer of night wasps and founder of Bee-Jor. Now Pleckoo is hunted by the army that once revered him. Yet in all his despair, Pleckoo receives prophecies from his termite god, assuring him he will kill Anand to rule the Sand, and establish the One True Religion.

And war is not yet over.

Now, Anand and Bee-Jor face an eastern threat from the Mad Emperor of the Barley People, intent on retaking stolen lands from a vulnerable and chaotic nation. And on the southern Weedlands, thousands of refugees clamor for food and safety and their own place in Bee-Jor. But the greatest threats to the new country come from within, where an embittered nobility and a disgraced priesthood plot to destroy Anand … then reunite the Lost Country with the Once Great and Holy Slope.

Can the boy who worked in the dung heap rise above the turmoil, survive his assassins, and prevent the massacre of millions?

Clark Thomas Carlton is an award-winning novelist, playwright, journalist, screen and television writer, and producer of reality TV. He was born in the South, grew up in the East, went to school in the North, and lives with his family in the West. As a child he spent hours observing ants and their wars and pondered their similarity to human societies.