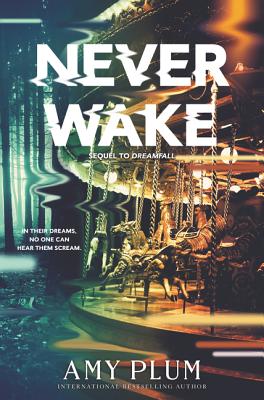 For most people, no matter how bad a nightmare is, it always comes to an end. But for Cata and the others, there may be no escape.

After an experimental treatment meant to cure their insomnia went horribly wrong, the teens were plunged into a shared dreamworld where their most terrifying fears became reality.

The six of them have no way of waking up. And they’re now beginning to realize that if they die there, they might actually die in the real world. One of the dreamers is already gone, and anyone could be next. So they must work together to survive.

But as they learn the truth about one another, they soon discover they are trapped with someone far more dangerous than their nightmares….

Perfect for fans of Danielle Vega, Kendare Blake, and Michelle Hodkin, Neverwake is the final book in this spine-tingling duology full of action and suspense that will give you nightmares you never could have imagined.

PRAISE FOR DREAMFALL: “Plum has done something remarkable with Dreamfall, it feels simultaneously like classic horror but also undeniably modern. The mind prison Plum creates is claustrophobic and terrifying, disorienting and dark. Horror readers will love the fresh premise and fast pace.”
— Madeleine Roux, New York Times bestselling author of the Asylum series

“Dreamfall is a gorgeous nightmare and an ominous mystery, a compulsively riveting read that delivers twist after twist. I can’t wait to enter this dream again!”
— Rachel Caine, #1 internationally bestselling author of the Morganville Vampires series

“A beautiful nightmare. Horrifying and impossible to put down.”
— Danielle Vega, author of the Merciless series


“Surreal and terrifying, Dreamfall is an adventure wrapped in a nightmare.”
— Gretchen McNeil, author of Ten and the Don’t Get Mad series

“Reminiscent of Neal Shusterman’s Full Tilt, this novel is a fast-paced nightmare come to life. A definite purchase for libraries serving younger sci-fi and horror fans, who will be eagerly waiting for the sequel.”
— School Library Journal

“Will appeal to fans of nightmarish fiction looking for an easy, but scary, read with a relatable premise.”
— ALA Booklist