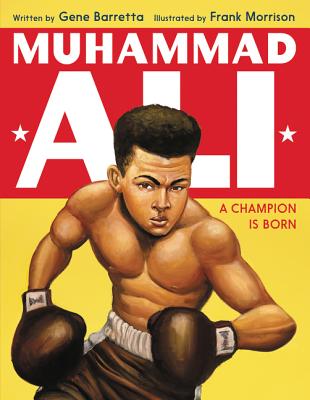 A Champion Is Born

"A high-quality children’s biography that little readers are sure to enjoy. There are themes of hard work, determination, overcoming obstacles, boxing, sports, persistence, and confidence—something Muhammad Ali clearly had plenty of."*

In this picture book biography of Muhammad Ali, author Gene Barretta and illustrator Frank Morrison tell the unforgettable childhood story of this legendary boxing champion and how one pivotal moment set him on his path to become the Greatest of All Time.

The Louisville Lip. The Greatest. The People’s Champion. Muhammad Ali had many nicknames. But before he became one of the most recognizable faces in the world, before the nicknames and the championships, before he converted to Islam and changed his name to Muhammad Ali, he was twelve-year-old Cassius Clay riding a brand-new red-and-white bicycle through the streets of Louisville, Kentucky. One fateful day, this proud and bold young boy had that bike stolen, his prized possession, and he wouldn’t let it go. Not without a fight.

This would be the day he discovered boxing. And a champion was born.


Praise For Muhammad Ali: A Champion Is Born…

“There are highlights of his boxing fame, later years and racial-justice and humanitarian work. Morrison gives the art a joyful zing and a serious yet eminently kid-friendly vibe.”
— New York Times Book Review

“Boxing legend Muhammad Ali comes to life for young readers. Close-up, in-your-face oil illustrations and a lively text design with plenty of onomatopoeia (”POW! POW! POW!”) and quotations from the champ give readers a sense of the life and style of the great Muhammad Ali.”
— Kirkus Reviews

“Working in acrylic, Morrison creates visceral, dynamic action shots, whether it’s a young Cassius racing down a rainy street on his bicycle or an opening fight sequence...An extensive afterword fills in details about Ali’s life, faith, and activism.”
— Publishers Weekly

“The book emphasizes the positive role model Ali became as he fought against racial and religious prejudice.”
— St. Louis Post-Dispatch

Gene Barretta is an award-winning author and illustrator of children's books. He is the recipient of the Carolyn W. Field Award and the Bank Street Cook Prize Honor. His books include Lincoln and Kennedy: A Pair to Compare, Now & Ben: The Modern Inventions of Benjamin Franklin, Dear Deer: A Book of Homophones, and Muhammad Ali. Gene has contributed illustrations and animation to Sesame Street and Between the Lions. He has also designed characters for the Jim Henson Company. He lives in Wynnewood, Pennsylvania. You can visit him online at www.genebarretta.com.