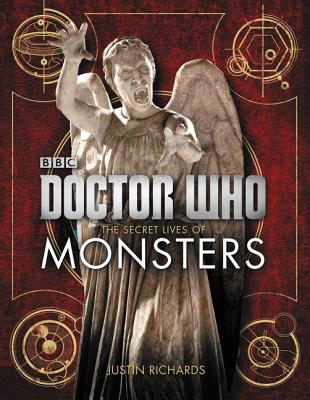 The Secret Lives of Monsters

A unique, in-depth look into the hidden lives and mysteries of the monsters from the hit BBC series Doctor Who—a fully illustrated color compendium that reveals proof of the existence of alien life out there and among us, packaged with removable artwork commissioned exclusively for the book.

For years, world governments and multinational organizations like the secretive UNIT have suppressed the truth. In this book, leading alientologist Justin Richards finally blows the lid off the biggest conspiracy to radically alter our world since The Scarlioni Incident.

Not only is there proof that alien life exists. The aliens are already here. Based on exclusive access to classified UNIT and Torchwood files—shocking information that has been suppressed for centuries—The Secret Lives of Monsters reveals the terrifying truth behind the rumors and legends.

Packed with iconic photographs, eyewitness accounts, diagrams and illustrations, and sixteen removable color prints, The Secret Lives of Monsters offers background details on a diverse range of alien species—including planetary and genetic origins, habits, social organization, and first human contact. If you want to know why the Sontaran’s probic vent is his weak point or what it is used for; how Daleks reproduce; or how to determine whether your best friend is a Zygon, the answers—as well as everything you need to know to survive future invasions—are here in The Secret Lives of Monsters.


Praise For Doctor Who: The Secret Lives of Monsters…

“Packaged with removable artwork commissioned exclusively for the book, this visual collection is the perfect gift book for any Doctor Who fan.”
— Geekdad.com

“...this is a juicy volume, covering everything from the Daleks to the Weeping Angels, and it includes a packet in back with removable artwork.”
— Films in Review

“...Everything you ever wanted to know about your favorite DW baddies—and more. There are loads of pictures and facts, so much information that it will make the head of any Whovian spin!”
— Kasterborous

Justin Richards has written for stage and screen as well as novels and graphic novels. He writes extensively for children and has also co-authored several action thrillers for young adults with the acknowledged master of the genre, Jack Higgins. The first two novels in his adult science fiction Never War series, The Suicide Exhibition and The Blood Red City, were published in 2013 and 2014, respectively. Justin acts as creative consultant to BBC Books' Doctor Who titles, and he has penned quite a few himself. Married with two children (both boys), Justin lives and works in Warwick, England, within sight of one of Britain's bestpreserved castles.