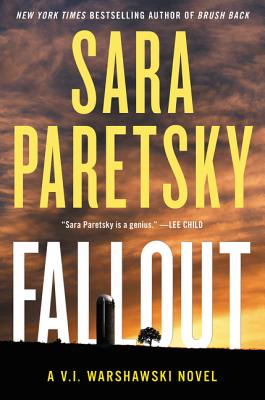 P.D. JAMES called her "the most remarkable" of today's suspense writers.

STIEG LARSSON loved her work so much, he named her in his novels.

And now SARA PARETSKY returns with the most extraordinary novel of her legendary career: FALLOUT.

Before there was Lisbeth Salander, before there was Stephanie Plum, there was V.I. WARSHAWSKI. To her parents, she's Victoria Iphigenia. To her friends, she's Vic. But to clients seeking her talents as a detective, she's V.I. And her new case will lead her from her native Chicago... and into Kansas, on the trail of a vanished film student and a faded Hollywood star.

Accompanied by her dog, V.I. tracks her quarry through a university town, across fields where missile silos once flourished — and into a past riven by long-simmering racial tensions, a past that holds the key to the crimes of the present. But as the mysteries stack up, so does the body count. And in this, her toughest case, not even V.I. is safe.

Exciting and provocative, fiercely intelligent and witty, FALLOUT is reading at its most enjoyable and powerful.

“V.I. Warshawski is one of my all-time favorite investigators. Doesn’t get any better than this!”
— Lisa Gardner

“Even out of her Chicago comfort zone in pursuit of a faded missing actress and a young filmmaker in Fallout, legendary V.I. Warshawski is as dogged and ferocious as ever. So is Sara Paretsky, who is at the top of her crime novel game.”
— C.J. Box

“Simply superb! As a fan of V.I. Warshawski from the very beginning, I can say without a doubt that Fallout finds both author and protagonist at the top of their games.”
— Jeffery Deaver

“An astonishing tour de force -- thrilling, moving, illuminating -- from an author of matchless intelligence, craft, and power. This is why Sara Paretsky reigns as one of the all-time greats.”
— Karin Slaughter

“Fallout is the best yet in one of our genre’s crucial, solid-gold, best-ever series. Paretsky is a genius, and she’s never afraid to dig a little deeper.”
— Lee Child

“Fallout is exactly what it promises: proof that so much of the pain in our present is from mistakes in our past. This book has a soul. Come see a master at work.”
— Brad Meltzer

“Writing advance praise for Sara Paretsky is like writing a job recommendation for Bill Gates. Paretsky is the gold standard for novels dealing with crime and its consequences.”
— Charlaine Harris

“Wonderful company and a rich discovery awaiting those who have yet to meet her. ”
— Los Angeles Times

“The best on the beat. ”
— Chicago Tribune

“Undoubtedly one of the best-written characters in mystery fiction. ”
— Baltimore Sun