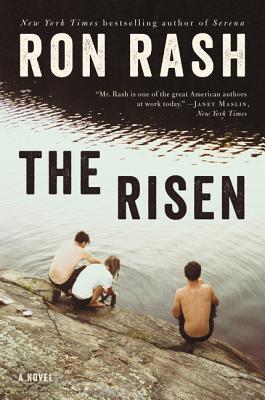 “The most overused cliche in the book business is 'page-turner,' so I will ask indulgence when I declare that The Risen by Ron Rash is a page-turner in the truest sense of the phrase. The Risen explores a young boy's coming of age, sibling rivalry, a decades-old mystery, and extreme life choices. It is an exciting read for all who appreciate literature at its finest.”
— Jake Reiss (M), The Alabama Booksmith, Birmingham, AL
View the List

“The Risen is an important novel — and an intriguing one — from one of our master storytellers. In its pages, the past rises up, haunting and chiding, demanding answers of us all.” —The News & Observer

New York Times bestselling author Ron Rash demonstrates his superb narrative skills in this suspenseful and evocative tale of two brothers whose lives are altered irrevocably by the events of one long-ago summer, one bewitching young woman—and the secrets that could destroy their lives.

While swimming in a secluded creek on a hot Sunday in 1969, sixteen-year-old Eugene and his older brother, Bill, meet the entrancing Ligeia. A sexy, free-spirited redhead from Daytona Beach banished to their small North Carolina town, Ligeia entrances the brothers, especially Eugene, who is drawn to her raw sensuality and rebellious attitude. Eugene begins to move farther and farther away from his brother, the cautious and dutiful Bill, and when Ligeia vanishes as suddenly as she appeared, the growing rift between the two brothers becomes immutable.

Decades later, the once close brothers now lead completely different lives. Bill is a gifted and successful surgeon, and a paragon of the community, while Eugene, the town reprobate, is a failed writer and determined alcoholic. When a shocking reminder of the past unexpectedly surfaces, Eugene is plunged back into that fateful summer, and the girl he cannot forget.

The deeper Eugene delves into his memories, the closer he comes to finding the truth. But can Eugene’s recollections be trusted? And will the truth set him free and offer salvation . . . or destroy his damaged life and everyone he loves?


Praise For The Risen: A Novel…

“Rash captures the gritty realities of modern Appalachia with mournful precision. . . . Beneath the surface, the novel contemplates more timeless questions about human frailty, the divinity of nature and the legacies of our native landscapes.”
— Atlanta Journal-Constitution

“So well-crafted that it reads like poetry. . . . Waterfall will leave the reader pondering the imponderables of life - and grateful, as Rash portrays, in being witness to life?s beauties, even while surrounded by hardship.”
— Jackson Clarion-Ledger

“A quick-paced, slender novel that captures the imperfections of how we all are, our weaknesses, our biases, our prejudices, and then, in times of stress and anxiety, if and how we emerge from those troubles with our morals intact.”
— Minneapolis Star Tribune

“Many have labeled [Rash] a Southern writer or an Appalachian writer, but those terms are deceptive. Rash?s characters are certainly connected to their landscape, but, as with any work that transcends, Rash brings the reader to the universal human concerns inside the particular details.”
— Electric Literature

Rash pulls the reader in with an element of suspense injected into his astute exploration of the clash of cultures, past and present.
— Booklist

“The Risen is an important novel - and an intriguing one - from one of our master storytellers. In its pages, the past rises up, haunting and chiding, demanding answers of us all.”
— Raleigh News & Observer

“Compelling... Rash, as always, has an absolutely sure sense of place... He is a riveting storyteller, ably heightening the tension between the story’s past and present... A story about control, evil and the nature of power — both to save and to kill.”
— Washington Post