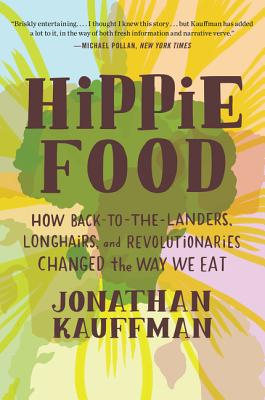 “An intelligently written narrative refreshingly free of personal admonitions... Kauffman comprehensively presents the history and the momentum of the organic food revolution while foraging for the keys to its increasing desirability and crossover appeal. An astute, highly informative food expose that educates without bias.” — Kirkus Reviews

“An outstanding food and cultural history…In this informative, briskly paced first book…Kauffman details how the concept of health food ‘evolved in the kitchens of young baby boomers’…Kauffman is equally thorough in tracing how these early innovators inspired the food co-ops and whole food stores that exist today.” — Publishers Weekly (starred review)

“Kauffman describes a time when a simple bowl of brown rice...and dashes of tamari could be an act as politically symbolic as hitchhiking to San Francisco with flowers in your hair... Alongside playful prose the great joy of Hippie Food is its rich cast of characters.” — Wall Street Journal

“Kauffman’s research left him with a fascinating picture of what longhairs ate and where they got it.” — NPR’s The Salt

“Briskly entertaining… I thought I knew this story, but Kauffman has added a lot to it, in the way of both fresh information and narrative verve.”
— Michael Pollan for the New York Times