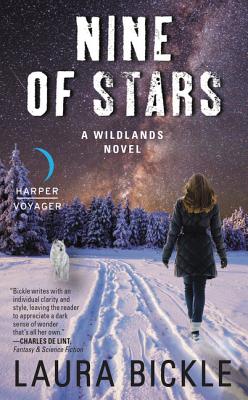 From critically acclaimed author Laura Bickle (Dark Alchemy) comes the first novel in the Wildlands series, NINE OF STARS. Longmire meets Patricia Brigg's Mercy Thompson in this exciting new series that shows how weird and wonderful the West can truly be.

Winter has always been a deadly season in Temperance, but this time, there’s more to fear than just the cold…

As the daughter of an alchemist, Petra Dee has faced all manner of occult horrors – especially since her arrival in the small town of Temperance, Wyoming. But she can’t explain the creature now stalking the backcountry of Yellowstone, butchering wolves and leaving only their skins behind in the snow. Rumors surface of the return of Skinflint Jack, a nineteenth-century wraith that kills in fulfillment of an ancient bargain.

The new sheriff in town, Owen Rutherford, isn’t helping matters. He’s a dangerously haunted man on the trail of both an unsolved case and a fresh kill - a bizarre murder leading him right to Petra’s partner Gabriel. And while Gabe once had little to fear from the mortal world, he’s all too human now. This time, when violence hits close to home, there are no magical solutions.

It’s up to Petra and her coyote sidekick Sig to get ahead of both Owen and the unnatural being hunting them all – before the trail turns deathly cold.


Praise For Nine of Stars: A Wildlands Novel…

“Bickle does an excellent job of letting her characters speak for themselves and blending realistic, grounded conflicts with her supernatural plot…Also of note is Bickle’s respectful treatment of Native American spirituality... Bickle is well on her way to establishing her work as a cornerstone of her genre.”
— Publishers Weekly (starred review)

“Full marks to Bickle for...this...consistently engaging series. Our protagonist is as likeable and resourceful as ever...The way the series sticks to a single source of the supernatural while still managing to come up with a wide range of manifestations...is very compelling.”
— RT Book Reviews

“Readers who like no-nonsense characters, the occult, Native American myths, and the modern Wild West will enjoy this. The writing is fun, compelling, and straight from the hip, with no apologies as to language used.”
— Booklist

Laura Bickle grew up in rural Ohio, reading entirely too many comic books out loud to her favorite Wonder Woman doll. After graduating with an MA in Sociology–Criminology from Ohio State University and an MLIS in Library Science from the University of Wisconsin-Milwaukee, she patrolled the stacks at the public library and worked with data systems in criminal justice. She now dreams up stories about the monsters under the stairs. Her work has been included in the ALA’s Amelia Bloomer Project 2013 reading list and the State Library of Ohio’s Choose to Read Ohio reading list for 2015-2016. More information about Laura’s work can be found at www.laurabickle.com.