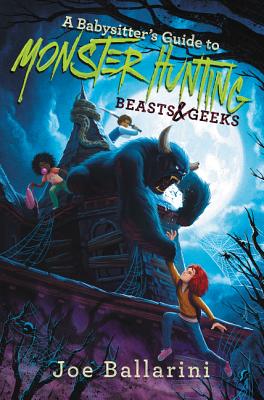 Goosebumps meets The Last Kids on Earth in the second action-packed adventure in a hilariously scary series about a secret society of monster-bashing babysitters.

“This shining gem in the campy monster drama genre is a step up from R.L. Stine’s Goosebumps.” —School Library Journal

Kelly’s been a celebrity ever since she defeated the Boogeyman and his army of nightmares on Halloween. But now all the other monsters want revenge.

And if Kelly’s going to survive Babysitter Bootcamp, she’ll have to face the Spider Queen, whose wicked web turns her parents, BFF, and middle-school teachers into mindless minions. All in a night’s work!

Praise for A BABYSITTER’S GUIDE TO MONSTER HUNTING #1: “This shining gem in the campy monster drama genre is a step up from R.L. Stine’s Goosebumps.”
— School Library Journal

“A series opener that melds Goosebumps and the Baby-Sitters Club with ironic glue.”
— Kirkus Reviews

“A nonstop thrillventure about how to overcome your monsters!”
— John Lee, director of Pee Wee’s Big Holiday

“A reminder that monsters believe in you even if you don’t believe in them.”
— Adam Robitel, director of Insidious and The Taking of Deborah Logan
or
Not Currently Available for Direct Purchase
Copyright © 2020 American Booksellers Association