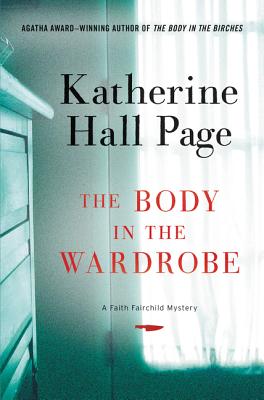 The Body in the Wardrobe (Hardcover)

“Rich in details of the city of Savannah, its cuisine, and the particulars of southern living, this satisfying mystery nicely weaves in the backstories of series characters’ lives that cozy readers relish—and it includes recipes of southern delicacies.” —Booklist

Minster’s wife, caterer, and part-time sleuth Faith Fairchild pairs up with Sophie Maxwell, last seen in Body in the Birches and now a newlywed living in historic Savannah, Georgia, where Sophie crosses paths with murder. Another delightful entry in the beloved mystery series, complete with delectable recipes.

Attorney Sophie Maxwell has come to Savannah to be with her new husband, Will. But nothing throws cold water on a hot relationship faster than a dead body. Worse for Sophie, no one believes the body she knows she saw is real. Will is spending an awful lot of time in Atlanta on a case he claims is urgent, and she’s been tasked with house hunting for them with his former sweetheart, who Sophie can’t help but suspect wishes Sophie would return to her Yankee roots!

Fortunately, Sophie has a good friend in Faith Fairchild. With teenage Amy being bullied by mean girls and husband Tom contemplating a major life change that will affect all the Fairchilds, Faith is eager for distraction in the form of some sleuthing. In between discussions of newlywed agita, surprising Savannah customs and, of course, fabulous low country food, Faith and Sophie will pair up to unmask a killer!

Katherine Hall Page is the author of twenty-three previous Faith Fairchild mysteries, the first of which received the Agatha Award for best first mystery. The Body in the Snowdrift was honored with the Agatha Award for best novel of 2006. Page also won an Agatha for her short story “The Would-Be Widower.” The recipient of the Malice Domestic Award for Lifetime Achievement, she has been nominated for the Edgar, the Mary Higgins Clark, the Maine Literary, and the Macavity Awards. She lives in Massachusetts and Maine with her husband.

“Page is a master plotter in the Christie tradition, but she makes her characters so vivid and so complicated that the day to day stuff of their lives is as interesting as the solutions to the crimes.”
— Connecticut Post

“Rich in details of the city of Savannah, its cuisine, and the particulars of southern living, this satisfying mystery nicely weaves in the backstories of series characters’ lives that cozy readers relish--and it includes recipes of southern delicacies.”
— Booklist