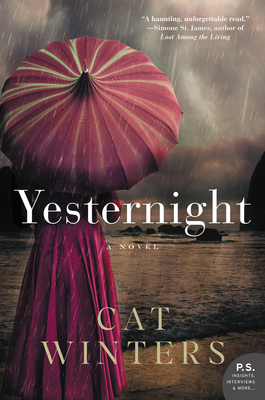 From the author of The Uninvited comes a haunting historical novel with a compelling mystery at its core.  A young child psychologist steps off a train, her destination a foggy seaside town. There, she begins a journey causing her to question everything she believes about life, death, memories, and reincarnation.

In 1925, Alice Lind steps off a train in the rain-soaked coastal hamlet of Gordon Bay, Oregon. There, she expects to do nothing more difficult than administer IQ tests to a group of rural schoolchildren. A trained psychologist, Alice believes mysteries of the mind can be unlocked scientifically, but now her views are about to be challenged by one curious child.

Seven-year-old Janie O’Daire is a mathematical genius, which is surprising. But what is disturbing are the stories she tells: that her name was once Violet, she grew up in Kansas decades earlier, and she drowned at age nineteen. Alice delves into these stories, at first believing they’re no more than the product of the girl’s vast imagination.  But, slowly, Alice comes to the realization that Janie might indeed be telling a strange truth.

Alice knows the investigation may endanger her already shaky professional reputation, and as a woman in a field dominated by men she has no room for mistakes. But she is unprepared for the ways it will illuminate terrifying mysteries within her own past, and in the process, irrevocably change her life.


Praise For Yesternight: A Novel…

“Yesternight is a story that is unassumingly haunting.” — Kirkus Reviews

“A haunting, unforgettable read.” — Simone St James author of Lost Among the Living

“Atmospheric and spooky with real gothic flair, the latest from Winters (The Uninvited) introduces a realistically flawed heroine stifled by the conventions of her time.” — Library Journal

“Winters follows The Uninvited with another gripping historical novel, this one an exploration of the effects of suppressed trauma and desire. [...]in this well-written tale that is suspenseful in all the right places, and will keep readers guessing at every page.” — Emily Park, Booklist

“[…] Be warned; this is not a simple mystery with a paranormal twist. Here is a story of possible reincarnation and madness that grips readers from the opening dreary, cold moment to the end and leaves one feeling unsettled, yet satisfied [...] Not a tale for the gentle reader.” — RT Book Reviews

“This novel is engaging, gripping, and features an extraordinary main character in Alice, a woman ahead of her time, intent on independence.” — Book Riot

Cat Winters's debut novel, In the Shadow of Blackbirds, was released to widespread critical acclaim. The novel has been named a finalist for the 2014 Morris Award, a School Library Journal Best Book of 2013, and a Booklist 2013 Top 10 Horror Fiction for Youth. Winters lives in Portland, Oregon, with her husband and two children.

1. Yesternight is a novel where the known and unknown collide and paranormal events are definitely a possibility. Have you ever experienced something in your life that can’t be explained away rationally?

2. At one point in the novel Alice maintains that “psychology explains everything.” Is it possible that psychology can explain Alice’s increasing conviction that Janie is indeed Violet reincarnated?

3. Alice’s life at first seems like an open book. However, as the novel progresses we discover that her family represses not only their acknowledgment of her sister Bea’s sexuality, but also any acknowledgment of Alice’s sexuality. And Alice herself has repressed her memories of her unwanted pregnancy. Did the Linds’ tendency to avoid such subjects strike you as normal behavior for the time period? Or did you find the family’s repression to be extreme?

4. Is it possible Janie is a child prodigy with high mathematical ability? Is it possible Alice was just a child with behavioral difficulties? Or do you feel that the only way they could know what they do is to truly be the products of reincarnation?

5. Bea insists to Alice, “Don’t insert yourself into other people’s lives.” How do you think that Alice’s tendency to do this has affected her life so far?

6. Hotels play a large role in Yesternight. Alice stays in Michael’s hotel at the opening of the book, as well as in the Hotel Yesternight and others. What do you think hotels symbolize with regard to the story?

7. Is Rebecca right to be suspicious of Michael’s motives with regard to their daughter? Is he a man who only wants to discover the truth, or does he want to exploit his child for profit?

8. What do you think the police think happened to Michael that would make him run off into the blizzard?

10. What do you think will happen to Alice in the future?