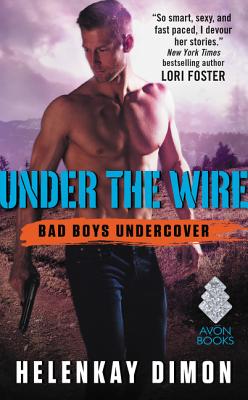 The Bad Boys of the Alliance—a top-secret military security agency—are back for more in HelenKay Dimon’s sexy, action-packed series

Only one thing could pull Reid Armstrong away from a vacation he’s earned with every muscle in his finely honed body—learning that his former fiancée has disappeared on a top-secret science expedition in the middle of nowhere. Second chances don’t come often in Reid’s business, and he needs to prove his worth to Cara Layne or die trying.

Waking up to find her camp destroyed and her colleagues missing, Cara is a walking target. She can’t trust anyone, least of all Reid. Even if his skills get them out alive, he’s a heartache waiting to strike twice. Yet being in close proximity proves their connection burns hotter than ever.

The body count is rising, the enemy is getting closer, and soon Reid will be right back in the position that cost him everything—forced to choose between the woman he loves, and the job that’s his only hope of saving them both . . .


Praise For Under the Wire: Bad Boys Undercover…

Nail-biting suspense and steamy romance are the mainstays of this novel, as the protagonists must discover whether their attractions stems from deeper emotions.
— Publishers Weekly praise for FACING FIRE

“The latest high-adrenaline installment in Dimon’s Bad Boys Undercover series delivers plenty of testosterone-fueled action and smoking-hot sexual chemistry between a rough, tough, alpha hero and a strong-willed heroine, who is more than his match. Give this one to fans of Suzanne Brockmann or Cherry Adair.”
— Booklist, praise for FALLING HARD

“Every time I pick up a HelenKay Dimon book I fall in love. With sexy heroes and heart-stopping intrigue, the stories pull me in and don’t let go until the final word.”
— New York Times Bestseller Vivian Arend

“Dimon’s second Bad Boys Undercover novel is a taut, unpredictable and pitch-perfect addition to a sizzling, daring series…Their connection is instant and adds levity to this pulse-pounding adventure, but it’s very real and profound, which makes their struggles that much more gripping.”
— Romantic Times BOOKclub, praise for FALLING HARD

“Dimon brings a heart-pounding mix of sexy romance and nonstop action to an intriguing plot, and the combination of smart storytelling and characters who share red-hot chemistry and believable conflict makes for lively, compelling reading. A sharp, complex, and intense romantic-suspense novel.”
— Kirkus Reviews

“With her remarkable flair for fusing a fast-paced, adrenaline-rich plot and a super-sexy love story, Dimon is quickly becoming the go-to author for readers who like their romances action-packed and red-hot.”
— Booklist