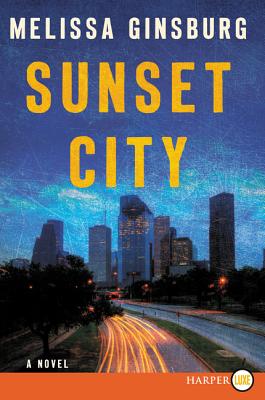 “A hardboiled exploration of the seedy side of Houston with sentences as sharp as a machete.”
— Literary Hub

“Sunset City is sexy, boozy, poignant and funny, with the excellence of Ginsburg’s writing more than compensating for some fairly thin plotting. Its pathos, rather than twists and turns, that will keep you glued to the pages.”
— The Guardian, Best Recent Crime Novels

“Sunset City has all the elements of a hard-boiled mystery: a violent murder, a troubled but sincere protagonist, an attractive detective. . . . And acting almost as a character itself is the city of Houston, the setting for Ginsburg’s foray into exploitation, drugs, and murder.”
— Houston Chronicle

“Ginsburg has penned a perfect detective novel for millennials… [and] a fine feminist read.”
— Austin Chronicle

“A soulful, sexy, dangerous noir. Ginsburg’s simple plot allows atmosphere to suffuse the story. Ginsburg presents a menu of suspects and drops clues nonchalantly, as if she’s writing a fifth noir, not a first. She has created a page-turner with a pitch-perfect conclusion. Sunset City is poetry noir.”
— Lone Star Literary Life

“Sunset City draws from classic noir and hard-boiled fiction, but in its themes and depictions of behavior, updates the genre… Without sacrificing the dark tone of her murder plot, Ginsburg perfectly depicts a blasé and non-judgmental attitude towards sex, drugs and employment.”
— Mystery People

“Each chapter is like a new melody in this noir hymnal; a survivor’s lamentation... Ginsburg’s economical use of language kept this slim volume moving, but it was clear that each and every word was carefully chosen to convey the correct tone. The chapters are intense, powerful bursts of writing.”
— BOLO Books Review

Ginsburg, a poet, crafts pitch-perfect dialogue and develops Charlotte and Houston with a disarming mix of nostalgic sadness and brutal honesty. A great recommendation for readers who enjoyed Gillian Flynn’s Sharp Objects (2006).”
— Booklist

“Ginsburg evokes some palpable moments of grief, exhaustion, and drink- and drug-fueled bad behavior in a novel that’s steamy in both the sexual and atmospheric senses.”
— Publishers Weekly

“Melissa Ginsburg’s Sunset City entrances from its first pages. Suffused with longing, regret and a twisty eroticism, it’s a mystery of character as much as crime, and is literary noir at its most captivating.”
— Megan Abbott, author of The Fever and Dare Me

“Smart and sexy, sexy and smart, this literary crime novel has it all in. Melissa Ginsburg understands our darkest secrets and desires, and she’s telling what she knows. Get ready, America.”
— Tom Franklin, author of Crooked Letter and Poachers

“In her stunning debut, Melissa Ginsburg has found in Houston what earlier noir writers found in Los Angeles: a dark netherworld of sin, violence, and blighted souls. Sunset City is sexy, disturb-ing, intense, and, at times, movingly poignant.”
— Ron Rash, author of Serena and The Cove

“Sunset City suffuses Charlotte Ford’s journey with a lyricism and yearning that elevates its genre. . . . An exciting debut by a crime writer with real heart and wisdom and the language to carry it.”
— Nic Pizzolato, creator of True Detective