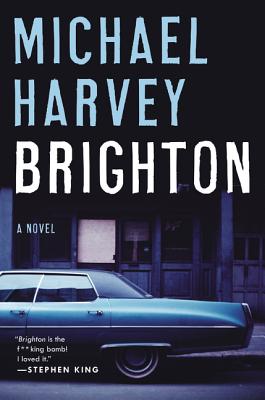 “Gritty, thrilling, and full of twists, Harvey's first novel to be set in his hometown of Boston is cause for celebration. Its namesake neighborhood is as richly textured as the characters in this deeply moving crime story about two friends haunted by their shared past of violence. While it will certainly appeal to fans of Dennis Lehane's Mystic River, Brighton sings with a fresh Bostonian voice that is all its own.”
— Thomas Wickersham, Brookline Booksmith, Brookline, MA
View the List

An extraordinary thriller—gripping, haunting, and marvelously told—about two friends growing up in a rapidly changing Boston, who must face the sins of their past in the midst of a series of brutal murders.

Kevin Pearce—baseball star, honor student, the pride of Brighton—was fifteen when he left town in the back of his uncle’s cab. He and his buddy Bobby Scales had just committed heinous violence for what they thought were the best of reasons. Kevin didn’t want a pass, but he was getting it anyway. Bobby would stay and face the music; Kevin’s future would remain bright as ever. At least that was the way things were supposed to work, except in Brighton things never work the way they’re supposed to.

Twenty-six years later, Kevin is a Pulitzer Prize–winning journalist for the Boston Globe. He’s never been back to his old block, having avoided his family and, especially, Bobby Scales. Then he learns his old friend is the prime suspect in a string of local murders. Suddenly, Kevin’s headed home—to protect a friend and the secret they share. To report this story to the end and protect those he loves, he must face not only an elusive, slippery killer, but his own corrupted conscience.


Praise For Brighton: A Novel…

“I have enjoyed all of Michael Harvey’s books, but his latest, BRIGHTON, is his best. I couldn’t stop reading.”
— John Grisham

“The story is boldly told, from so many angles and points of view that the moral center keeps shifting. Even the characters who die won’t go away in this fiercely felt lament for a neighborhood and a youth that never was.”
— New York Times Book Review

“A tale of murder and old friends-and a paean to the dark, gritty streets of Boston.”
— Entertainment Weekly

“Sharp as the blades used to gut the guilty and innocent alike, Harvey’s fierce stand-alone is a blood-soaked tribute to finding your past and living with the consequences.”
— Kirkus (Starred Review)

“Riveting. . . . Harvey’s gritty tribute to the working-class neighborhoods of his youth is as authentically captured as the best of Dennis Lehane. Fans of Martin Scorsese’s film The Departed will love the violent twists and turns of the novel’s final chapters.”
— Library Journal, Starred Review

“The comparisons to Dennis Lehane, George Pelecanos, and Richard Price are all apt. . . .Brighton is a chilling tale. You’ll come up for air, at the end, shivering and in need of a drink.”
— New York Journal of Books

“A superb crime thriller with all the hallmarks of high-end literary fiction, Brighton . . . will exhaust you and fool you, astonish you and hold you in its clutches. You may wish you could close your eyes, but they’ll be stuck wide open.”
— Washington Independent Review of Books

“…[Put] this dark, gritty and beautiful novel at the top of your must-read list.”
— Bookreporter

“Harvey, who usually writes Chicago-based thrillers . . .ventures further afield to Boston, where a journalist returns to the rough neighborhood where he grew up to save an old friend from murder charges.”
— Chicago Reader

“Brighton is an excellent thriller about two friends growing up in a rapidly changing Boston, who must face the sins of their past in the midst of a series of brutal murders.”
— Omnivoracious

“I may (or may not) be the first to compare Michael Harvey’s Brighton to Dennis Lehane’s Mystic River, but I won’t be the last. . . . both books approach Thomas Wolfe or Pat Conroy levels of writing. . . . [Harvey] has seriously upped his game with Brighton.”
— Bookpage Top Pick

“…this is Lehane territory… the writing is smooth and the people feel real. Surprising twists.”
— Chicago Business

“This engrossing page-turner, which has been sold to the movies, brings to mind classics of the genre, like The Departed, which was set in a similar Boston underbelly.”
— National Book Review

“I can’t think of a better way to describe this book than a gritty look at what life was like on the tougher side of Boston. . . . Each character was well written and Michael Harvey definitely knows what he’s doing.”
— San Francisco Book Review

“Creating characters vulnerable and brave is Harvey’s artistry. He’ll win prizes for this beauty. His characters are real, and the atmosphere is electric, oppressive and virulent.”
— Durango Telegraph

“A compelling tale of mystery and suspense, a piercing examination of poverty and bigotry in Boston’s underbelly . . . and a psychological drama of Kevin’s confrontation with his own past. Brighton emerges as one of this year’s major works in the crime genre.”
— PCA Mystery and Detective Fiction

“Harvey has taken the elements of a classic crime novel and heightened them with race and class tensions, as well as the story of a remarkable friendship and an unforgettable family drama. The result is a novel that crackles with energy and makes you hold on until the final page.”
— Ivy Pochoda, author of Visitation Street

“Harvey has taken the elements of a classic crime novel and heightened them with race and class tensions, as well as the story of a remarkable friendship and an unforgettable family drama. The result is a novel that crackles with energy and makes you hold on until the final page.”
— Chris Pavone, New York Times bestselling author of The Expats