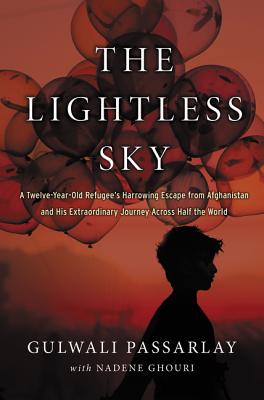 A gripping, inspiring, and eye-opening memoir of fortitude and survival—of a twelve-year-old boy’s traumatic flight from Afghanistan to the West—that puts a face to one of the most shocking and devastating humanitarian crises of our time.

“To risk my life had to mean something. Otherwise what was it all for?”

In 2006, after his father was killed, Gulwali Passarlay was caught between the Taliban who wanted to recruit him, and the Americans who wanted to use him. To protect her son, Gulwali’s mother sent him away. The search for safety would lead the twelve-year-old across eight countries, from the mountains of eastern Afghanistan through Iran and Europe to Britain. Over the course of twelve harrowing months, Gulwali endured imprisonment, hunger, cruelty, brutality, loneliness, and terror—and nearly drowned crossing the Mediterranean Sea. Eventually granted asylum in England, Gulwali was sent to a good school, learned English, won a place at a top university, and was chosen to help carry the Olympic Torch in the 2012 London Games.

In The Lightless Sky, Gulwali recalls his remarkable experience and offers a firsthand look at one of the most pressing issues of our time: the modern refugee crisis—the worst displacement of millions of men, women, and children in generations. Few, like Gulwali, make it to a country that offers the chance of freedom and opportunity. A celebration of courage and determination, The Lightless Sky is a poignant account of an exceptional human being who is today an ardent advocate of democracy—and a reminder of our responsibilities to those caught in terrifying and often deadly circumstances beyond their control.


Praise For The Lightless Sky: A Twelve-Year-Old Refugee's Harrowing Escape from Afghanistan and His Extraordinary Journey Across Half the World…

“The Lightless Sky is a heart-rending read that illuminates the plight of unaccompanied minors forced to leave their homes and loved ones. [Passarlay’s] powerful account is a testament to the courage of all those fleeing conflict in search of safety.”
— The Independent (UK)

“A powerful account of a year-long journey …. [a] life that was almost snuffed out so prematurely is now bursting with promise.”
— The Times (London)

“A tale of fortitude and friendship told through a child’s eyes, Gulwali’s story casts much needed light on the difficult decisions refugees are forced to take about who to trust and how to stay alive against a backdrop of political indifference.”
— The Refugee Council (UK)

“A tale of gracious triumph over all sorts of adversity as the author describes his life as a refugee and his arduous journey... This is a harrowing but necessary must-read about an exceptional young man, adding context to so much of what we read in the papers.”
— Stylist (UK)

“At once deeply upsetting and entirely inspiring, this is the story of a young boy who faced tremendous misfortune and danger on his journey from Afghanistan to Britain… this young man’s journey demands to be read, and his story and achievements celebrated.”
— World Travel Guide

“The Lightless Sky is a remarkably vivid memoir [that] leaves you fearing for Gulwali’s safety and admiring his utterly tenacious resolve against overwhelming odds; but at the same time it is also a fearsome reminder of the experiences being endured by numberless, anonymous migrants.”
— The Herald (Scotland)

Gulwali Passarlay was sent away from Afghanistan as a young boy, fleeing the conflict that had claimed his father’s life. After an extraordinarily tortuous journey across eight countries, Gulwali arrived in the United Kingdom a year later and has most recently devoted his new life to education. Now twenty-one years old, he is set to graduate from the University of Manchester with a degree in politics. Gulwali is a member of many prestigious political, aid, and youth groups, each a stepping-stone to his ultimate goal: to run for the presidency of Afghanistan.