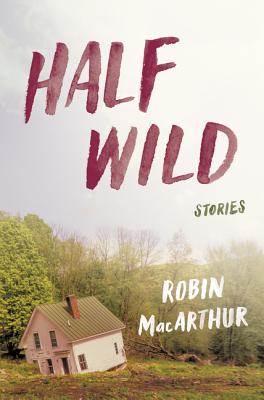 “MacArthur's debut story collection is set in the hilly backcountry of southern Vermont -- a rural landscape of half-abandoned farms and double-wide trailers, but also one of immense natural beauty and wildness. Her characters hew close to this land -- even those who have left cannot help but return. These are beautifully drawn portraits of people who, despite poverty and decay, remain vibrantly alive to their world and to the power of memory. I cannot wait to read more from this author!”
— Peter Sherman (E), Wellesley Books, Wellesley, MA
View the List

“This heartbreakingly honest and authentic fiction will make you weep over, laugh at, and finally cheer for, mothers and daughters, sons and fathers, lovers and losers, and the human race in general. Half Wild is American fiction, and American literature, at its very best.”—Howard Frank Mosher, author of The Great Northern Express and Northern Borders

Spanning nearly forty years, the stories in Robin MacArthur’s formidable debut give voice to the dreams, hungers, and fears of a diverse cast of Vermonters—adolescent girls, aging hippies, hardscrabble farmers, disconnected women, and solitary men. Straddling the border between civilization and the wild, they all struggle to make sense of their loneliness and longings in the stark and often isolating enclaves they call home—golden fields and white-veiled woods, dilapidated farmhouses and makeshift trailers, icy rivers and still lakes rouse the imagination, tether the heart, and inhabit the soul.

In “Creek Dippers,” a teenage girl vows to escape the fate that has trapped her eccentric mother. In “God’s Country,” an elderly woman is unexpectedly reminded of a forbidden youthful passion and the chance she did not take. Returning to her childhood house when her mother falls ill, a daughter grapples with her own sense of belonging in “The Women Where I’m From.”

With striking prose powerful in its clarity and purity, MacArthur effortlessly renders characters—men and women, young and old—cleaved to the fierce and beautiful land that has defined them.

Robin MacArthur lives and works on the farm where she was born in Vermont. She is the author of Half Wild: Stories (winner of the 2017 PEN/New England Award), the editor of Contemporary Vermont Fiction: An Anthology, and one-half of the indie-folk duo Red Heart the Ticker.

Praise For Half Wild: Stories…

“Move over Annie Proulx, Raymond Carver, and Flannery O’Connor. Make room for Vermont’s own Robin MacArthur. Half Wild is American fiction, and American literature, at its very best.”
— Howard Frank Mosher, author of Where the Rivers Flow North and God's Kingdom

“MacArthur writes with the ear of a musician and a classic, pure command of the short story form, like a dispatch from Eudora Welty in the great north woods.”
— Megan Mayhew Bergman, author of Birds of a Lesser Paradise and Almost Famous Women

“Half Wild... made me feel a bittersweet nostalgia for all the possible lives I could have led. This is a beautiful and emotionally rich book and it casts a big spell.”
— Diane Cook, author of Man V. Nature

“Robin MacArthur is a striking new voice and Half Wild is a stormy marvel of a debut.”
— Laura van den Berg, author of Find Me and The Isle of Youth

“MacArthur is able to render complicated situations precisely and depict tenderness and harshness with an equally deft hand.”
— Publishers Weekly

“Each powerful story in this collection becomes part of a fearsome whole, one that celebrates the ways in which memory itself is half wild.”
— Ploughshares (online)
or
Not Currently Available for Direct Purchase
Copyright © 2020 American Booksellers Association