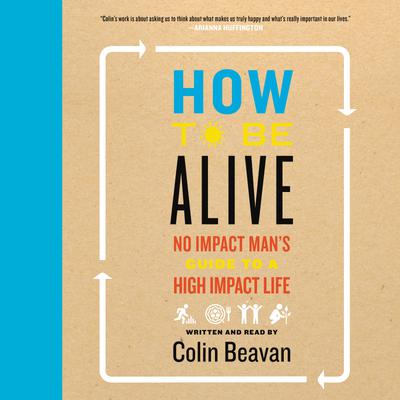 How to Be Alive (Digital Audiobook)

A Guide to the Kind of Happiness That Helps the World

“This is the book where self-help turns into helping the world—and then turns back into helping yourself find a better life. Fascinating and timely!”—Bill McKibben, author of Eaarth: Making a Life on a Tough New Planet

What does it take to achieve a successful and satisfying life? Not long ago, the answer seemed as simple as following a straightforward path: college, career, house, marriage, kids, and a secure retirement. Not anymore. Staggering student loan debt, sweeping job shortages, a chronically ailing economy—plus the larger issues of global unrest, poverty, and our imperiled environment—make the search for fulfillment more challenging. And, as Colin Beavan, activist and author of No Impact Man, proclaims, more exciting.

In this breakthrough book, Beavan extends a hand to those seeking more meaning and joy in life even as they engage in addressing our various world crises. How to Be Alive nudges the unfulfilled toward creating their own version of the Good Life—a life where feeling good and doing good intersect. He urges readers to reexamine the “standard life approaches” to pretty much everything and to experiment with life choices that are truer to their values, passions, and concerns.

How do you stop placing limits on your potential impact? How do you make your choices really matter in everything from your clothing purchases to your career? How do you find the people who will most support you in your quest for a good life? To answer these questions and more, Beavan draws on classic literature and philosophy; surprising new scientific findings; and the uplifting personal stories of real-life “lifequesters”—people who are breaking away from those old broken paths, blazing fresh trails, and reveling in every step along the way.

“There is a movement afoot for a better life and Colin Beavan is its prophet, with a new book as powerful as his already classic No Impact Man.”—John de Graaf, coauthor of Affluenza

Writer and social change activist Colin Beavan attracted international attention for his year-long lifestyle-redesign project and the wildly popular book, No Impact Man, and the Sundance-selected documentary film that it inspired. He has appeared on Nightline, Good Morning America, The Colbert Report, The Montel Williams Show, and NPR, and his story has been featured in news outlets from Time magazine to the New York Times. A sought-after speaker by wide-ranging audiences, he also consults with businesses on improving eco-friendly and human-centered practices. Beavan is the author of two other books, Operation Jedburgh: D-Day and America’s First Shadow War and Fingerprints: The Origins of Crime Detection and the Murder Case That Launched Forensic Science, and his writing has appeared in Esquire, the Atlantic, and the New York Times. He is the founder of the No Impact Project and a dharma teacher in the Kwan Um School of Zen. He lives in Brooklyn, New York.