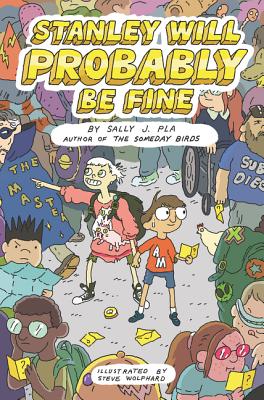 “In Stanley Will Probably Be Fine, Sally J. Pla captures the challenges of moving through a world that can sometimes feel too big to face and introduces a character that readers cannot help but root for. A fun, vibrant story full of humanity and heart!” — Booki Vivat, New York Times bestselling author of Frazzled

“Stanley Fortinbras is a master of superhero lore, an artist, a kid who deeply feels the impact of his surroundings, and a protagonist with enough heart and soul for a thousand comic-con attendees. Readers of Stanley Will Probably Be Fine will be much more than fine; they’ll be elated.” — Mike Jung, author of Unidentified Suburban Object

“Stanley is an eminently lovable underdog!” — Leslie Connor, author of All Rise for the Honorable Perry T. Cook and The Truth as Told by Mason Buttle

★ “[Stanley is] a multidimensional character of great depth who gradually learns how to calm his worried mind. Add to the growing list of intelligent books about kids whose brains operate outside the norm.” — Kirkus Reviews (starred review)

“Stanley’s anxiety and sensory processing disorder are portrayed in a sensitive and relatable way. Refreshing.” — Booklist

“Comics fans and young readers who experience the world more intensely than their peers will love this one.” — BookPage.com