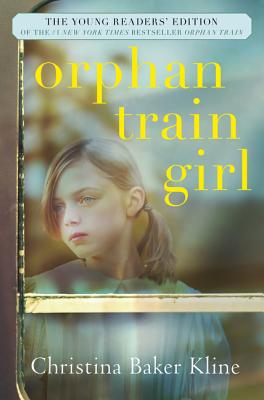 Adapted and condensed for a young audience, Orphan Train Girl includes an author’s note and archival photos from the orphan train era. This book is especially perfect for mother/daughter reading groups.

Molly Ayer has been in foster care since she was eight years old. Most of the time, Molly knows it’s her attitude that’s the problem, but after being shipped from one family to another, she’s had her fair share of adults treating her like an inconvenience. So when Molly’s forced to help an a wealthy elderly woman clean out her attic for community service, Molly is wary.

But from the moment they meet, Molly realizes that Vivian isn’t like any of the adults she’s encountered before. Vivian asks Molly questions about her life and actually listens to the answers.

Soon Molly sees they have more in common than she thought. Vivian was once an orphan, too—an Irish immigrant to New York City who was put on a so-called "orphan train" to the Midwest with hundreds of other children—and she can understand, better than anyone else, the emotional binds that have been making Molly’s life so hard.

Together, they not only clear boxes of past mementos from Vivian’s attic, but forge a path of friendship, forgiveness, and new beginnings.

“Kline’s prose is fluid and draws readers into the characters, and each chapter’s cliffhanger ending keeps the pages turning. Part coming-of-age novel, part historical fiction, this book will appeal to a wide range of readers.”
— BookPage.com

“Kline expertly weaves the dual narratives of both [characters] as the two form a healing friendship.With a mix of historical and contemporary settings, this successful adaptation of an adult novel is likely to appeal to both young and old.”
— School Library Journal

1. On the surface, Vivian’s and Molly’s lives couldn’t be more different. In what ways are their stories similar?

2. In the prologue Vivian mentions that her “true love” died when she was 23, but she doesn’t mention the other big secret in the book. Why not?

3. Why hasn’t Vivian ever shared her story with anyone? Why does she tell it now?

4. What role does Vivian’s grandmother play in her life? How does the reader’s perception of her shift as the story unfolds?

5. Why does Vivian seem unable to get rid of the boxes in her attic?

6. In Women of the Dawn, a nonfiction book about the lives of four Wabanaki Indians excerpted in the epigraph, Bunny McBride writes: “In portaging from one river to another, Wabanakis had to carry their canoes and all other possessions. Everyone knew the value of traveling light and understood that it required leaving some things behind. Nothing encumbered movement more than fear, which was often the most difficult burden to surrender.” How does the concept of portaging reverberate throughout this novel? What fears hamper Vivian’s progress? Molly’s?

7. Vivian’s name changes several times over the course of the novel: from Niamh Power to Dorothy Nielsen to Vivian Daly. How are these changes significant for her? How does each name represent a different phase of her life?

8. What significance, if any, does Molly Ayer’s name have?

9. How did Vivian’s first-person account of her youth and the present-day story from Molly’s third-person-limited perspective work together? Did you prefer one story to the other? Did the juxtaposition reveal things that might not have emerged in a traditional narrative?

11. What does Vivian mean when she says, “I believe in ghosts”?

12. When Vivian finally shares the truth about the birth of her daughter and her decision to put May up for adoption she tells Molly that she was “selfish” and “afraid.” Molly defends her and affirms Vivian’s choice. How did you perceive Vivian’s decision? Were you surprised she sent her child to be adopted after her own experiences with the Children’s Aid Society?

13. When the children are presented to audiences of potential caretakers, the Children’s Aid Society explains adoptive families are responsible for the child’s religious upbringing. What role does religion play in this novel? How do Molly and Vivian each view God?

14. When Vivian and Dutchy are reunited she remarks, “However hard I try, I will always feel alien and strange. And now I’ve stumbled on a fellow outsider, one who speaks my language without saying a word.” How is this also true for her friendship with Molly?

15. When Vivian goes to live with the Byrnes Fanny offers her food and advises, “You got to learn to take what people are willing to give.” In what ways is this good advice for Vivian and Molly? What are some instances when their independence helped them?

16. Molly is enthusiastic about Vivian’s reunion with her daughter, but makes no further efforts to see her own mother. Why is she unwilling or unable to effect a reunion in her own family? Do you think she will someday?

17. Vivian’s Claddagh cross is mentioned often throughout the story. What is its significance? How does its meaning change or deepen over the course of Vivian’s life?