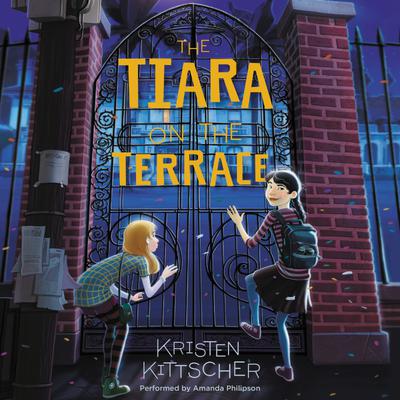 The Tiara on the Terrace (Digital Audiobook)

In this funny, clever novel, perfect for fans of Pseudonymous Bosch and Gordon Korman and a companion to The Wig in the Window, tween sleuths Sophie Young and Grace Yang go undercover at Luna Vista's Winter Sun Festival to catch a murderer before he—or she—strikes again.

Sophie Young and Grace Yang have been taking it easy ever since they solved the biggest crime Luna Vista had ever seen. But things might get interesting again now that everyone is gearing up for the 125th annual Winter Sun Festival—a town tradition that involves floats, a parade, and a Royal Court made up of local high school girls.

Kristen Kittscher is a writing tutor in Pasadena, California, where she lives with her husband. The 2014 James Thurber House Children's Writer-in-Residence and a graduate of Brown University, she taught middle-school English for many years. She is the author of The Tiara on the Terrace and The Wig in the Window.