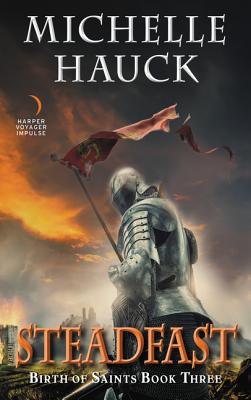 The final novel in Michelle Hauck's Birth of Saints trilogy, Steadfast follows Grudging and Faithful in telling the fateful story of Claire and Ramiro and their battle against a god that hungers for blood.

When the Northerners invaded, the ciudades-estado knew they faced a powerful army. But what they didn’t expect was the deadly magic that was also brought to the desert: the white-robed priests with their lethal Diviners, and the evil god, Dal. Cities have burned, armies have been decimated, and entire populaces have been sacrificed in the Sun God’s name, and it looks as if nothing can prevent the devastation.

But there are still those with hope.

Claire, a Woman of the Song, has already brought considerable magic of her own to fight the Children of Dal, and Ramiro, a soldier who has forsaken his vows to Colina Hermosa’s cavalry in order to stand by her side, has killed and bled for their cause. Separated after the last battle, they move forward with the hope that the saints will hear their prayers, their families will be saved, and that they’ll see each other once more.

A stirring conclusion to the Birth of Saints series, Ramiro and Claire’s journey finds completion in a battle between evil and love.

Michelle Hauck lives in the bustling metropolis of northern Indiana with her hubby and two teenagers. Two papillons help balance out the teenage drama. Besides working with special needs children by day, she writes all sorts of fantasy, giving her imagination free range. A book worm, she passes up the darker vices in favor of chocolate and looks for any excuse to reward herself. She is the author of the YA epic fantasy Kindar's Cure, as well as the short story “Frost and Fog,” which is included in the anthology Summer's Double Edge.