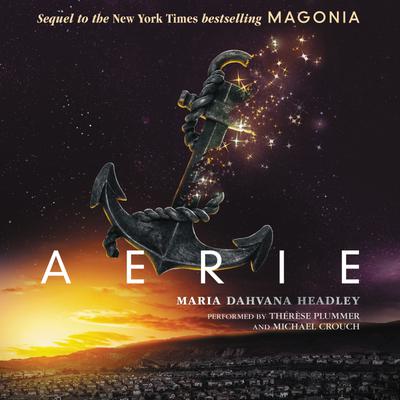 The stunning sequel to Maria Dahvana Headley’s bestselling, critically acclaimed Magonia tells the story of one girl who must make an impossible choice between two families, two homes—and two versions of herself.

Aza Ray is back on earth. Her boyfriend, Jason, is overjoyed. Her family is healed. She’s living a normal life, or as normal as it can be if you’ve spent the past year dying, waking up on a sky ship, and discovering that your song can change the world.

As in, not normal. Part of Aza still yearns for the clouds, no matter how much she loves the people on the ground.

When Jason’s paranoia over Aza’s safety causes him to make a terrible mistake, Aza finds herself a fugitive in Magonia, tasked with opposing her radical, bloodthirsty, recently escaped mother, Zal Quel, and her singing partner, Dai. She must travel to the edge of the world in search of a legendary weapon, the Flock, in a journey through fire and identity that will transform her forever.

Told in Maria Headley’s trademark John Green–meets–Neil Gaiman style, Aerie is sure to satisfy the many readers who can’t wait to return to the spellbinding world of Magonia.

Maria Dahvana Headley is a memoirist, novelist, and editor, most recently of the novel Queen of Kings and the New York Times bestselling anthology Unnatural Creatures (coeditor with Neil Gaiman). As the author of the work of short fiction "The Traditional," she has been nominated for a Shirley Jackson Award. She lives in Brooklyn with a seven-foot stuffed crocodile and a collection of star charts from the 1700s.