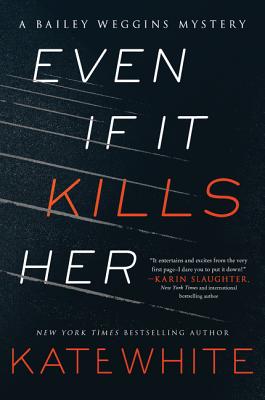 Even If It Kills Her

In this exhilarating new thriller from New York Times bestselling author Kate White, one young woman searches for clues to the murder of her family, only to discover a shocking secret about herself that holds the key to everything.

Jillian Lowe seemed to have it all. Both beautiful and accomplished, she lit up any room that she walked into. All of that dramatically changed when her parents and two siblings were brutally murdered at her childhood home her second year in college. The crime shattered what was once a picture-perfect family and nearly derailed Jillian’s hopes for her future.

Now, sixteen years later, Jillian is shocked to learn that the man imprisoned for murdering her family didn't do it. With the real killer walking free and the cops dragging their heels, Jillian once again feels her life unraveling, and desperately seeks help from an old friend from college, true crime writer Bailey Weggins.

As the two women return to Jillian’s childhood town to investigate, it doesn’t take long for their sleuthing to cause shock waves. Someone starts watching their every move. As they uncover deeply-guarded secrets, so shocking that they make Jillian rethink her entire relationship to her family, Bailey and Jillian find themselves in fear of their own lives. The truth has consequences and they must decide if they’re ready to face them.


Praise For Even If It Kills Her: A Bailey Weggins Mystery…

“Compulsively readable and skillfully plotted, EVEN IF IT KILLS HER is Kate White’s dynamic return to the Bailey Weggins series. It entertains and excites from the very first page – I dare you to put it down!” — Karin Slaughter, New York Times and International Bestselling Author

“White builds suspense masterfully, and this seventh in the Bailey Weggins series has the makings of another hit. Bailey is a smart, sexy sleuth, and her exploits make for thoroughly entertaining reading.” — Booklist

“Well-executed...The smaller the town, the bigger (and dirtier) its secrets.” — Kirkus Reviews