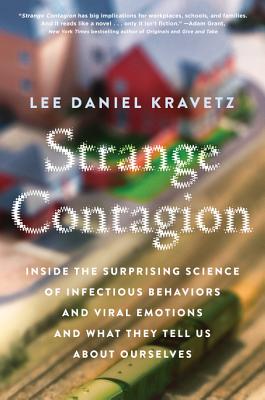 Picking up where The Tipping Point leaves off, respected journalist Lee Daniel Kravetz’s Strange Contagion is a provocative look at both the science and lived experience of social contagion.

In 2009, tragedy struck the town of Palo Alto: A student from the local high school had died by suicide by stepping in front of an oncoming train. Grief-stricken, the community mourned what they thought was an isolated loss. Until, a few weeks later, it happened again. And again. And again. In six months, the high school lost five students to suicide at those train tracks.

A recent transplant to the community and a new father himself, Lee Daniel Kravetz’s experience as a science journalist kicked in: what was causing this tragedy? More important, how was it possible that a suicide cluster could develop in a community of concerned, aware, hyper-vigilant adults?

The answer? Social contagion. We all know that ideas, emotions, and actions are communicable—from mirroring someone’s posture to mimicking their speech patterns, we are all driven by unconscious motivations triggered by our environment. But when just the right physiological, psychological, and social factors come together, we get what Kravetz calls a "strange contagion:" a perfect storm of highly common social viruses that, combined, form a highly volatile condition.

Strange Contagion is simultaneously a moving account of one community’s tragedy and a rigorous investigation of social phenomenon, as Kravetz draws on research and insights from experts worldwide to unlock the mystery of how ideas spread, why they take hold, and offer thoughts on our responsibility to one another as citizens of a globally and perpetually connected world.


Praise For Strange Contagion: Inside the Surprising Science of Infectious Behaviors and Viral Emotions and What They Tell Us About Ourselves…

“This is a marvelous account of why we catch the emotions and habits of the people around us—for better and for worse. It has big implications for workplaces, schools, and families. And it reads like a novel…only it isn’t fiction”
— Adam Grant, New York Times bestselling author of Originals and Give and Take

“Kravetz’s gripping narrative has the tension of a thriller, but the stories he shares are tragically real.”
— Gemma Tarlach, Discover Magazine

“Strange Contagion is a deep dive into something very scary, but at the end, it is also about how we can catch hope and resilience and we can spread that even in the darkest of times.”
— Marcie Geffner, Publishers Weekly

“Strange Contagion is a thoughtful, provocative discourse about a gripping topic, providing a strong foundation for dialogue and further exploration.”
— Psychology Today

“A chilling and important look at the social contagions that threaten us.”
— BBC

“Lee Daniel Kravetz has written a wise and searching book, bristling with restless intelligence. This is a lively, sweeping story. Though Strange Contagion starts with tragedy, it refuses to linger there, instead opening up into questions of community, resilience, and just what it is we owe to one another
— Daniel Smith, New York Times bestselling author of Monkey Mind: A Memoir of Anxiety

“This is a powerful book on something pervasive in our world while still mysterious. Mirroring builds cultures, generates social change and connects peoples. Yet it can take lives, many lives while leaving others untouched. The story that Lee Daniel Kravetz weaves here is lucid, profound and compassionate”
— Marco Iacoboni, author of Mirroring People; Professor, Dept. of Psychiatry and Biobehavioral Sciences; and Director, Neuromodulation Lab/David Geffen School of Medicine at UCLA

“Compelling and well-researched, Lee Daniel Kravetz’s exploration of why and how social contagions take hold makes fascinating reading. The answers may not be easy but, as he cogently argues, there is much to be gained in their pursuit.”
— Marshall Goldsmith, New York Times bestselling author of Triggers

“ Strange Contagion is the best and most fascinating book I’ve read on social contagions, and a must-read for every parent, teacher, leader, and policy maker who wants to promote the spread of helpful thoughts and actions, and mitigate against harmful ones.”
— Kristina Rizga, author of Mission High and senior education reporter, Mother Jones.

Lee Daniel Kravetz has a master's degree in counseling psychology and is a graduate of the University of Missouri–Columbia School of Journalism. He has written for Psychology Today, the Huffington Post, and the New York Times, among other publications. He lives in the San Francisco Bay Area with his wife and children.