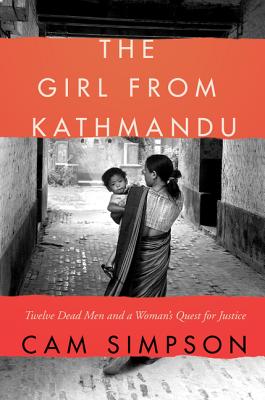 The Girl from Kathmandu

Twelve Dead Men and a Woman's Quest for Justice

The shocking story of the massacre of a group of Nepalese men working as Defense contractors for the United States Government during the Iraq War, and the widow who dedicated her life to finding justice for her husband and the other victims—a riveting tale of courageous heroes, corporate war profiteers, international business, exploitation, trafficking, and human rights in the age of global capitalism that reveals how modern power truly works.

In August of 2004, twelve men left their village in Nepal for jobs at a five-star luxury hotel in Amman, Jordan. They had no idea that they had actually been hired for sub-contract work on an American military base in Iraq. But fate took an even darker turn when the dozen men were kidnapped and murdered by Islamic extremists. Their gruesome deaths were captured in one of the first graphic execution videos disseminated on the web—the largest massacre of contractors during the war. Compounding the tragedy, their deaths received little notice.

Why were these men, from a remote country far removed from the war, in Iraq? How had they gotten there? Who were they working for? Consumed by these questions, award-winning investigative journalist Cam Simpson embarked on a journey to find answers, a decade-long odyssey that would uncover a web of evil spanning the globe—and trigger a chain of events involving one brave young widow, three indefatigable human rights lawyers, and a formidable multinational corporation with deep governmental ties.

A heart-rending, page-turning narrative that moves from the Himalayas to the Middle East to Houston and culminates in an epic court battle, The Girl from Kathmandu is a story of death and life—of the war in Iraq, the killings of the twelve Nepalese, a journalist determined to uncover the truth, and a trio of human rights lawyers dedicated to finding justice. At its heart is one unforgettable young woman, Kamala Magar, who found the courage to face the influential men who sent her husband to his death—a model of strength hope, bravery, and an unbreakable spirit who reminds us of the power we all have to make a difference.


Praise For The Girl from Kathmandu: Twelve Dead Men and a Woman's Quest for Justice…

“[Cam Simpson] has given us an anatomy of globalized labor at its most shameful ... By scraping away at layers of corporate misdirection, by asking and asking again and not letting go, Simpson reached something naked and ugly and unimpeachably true.”  — New York Times Book Review

“Simpson’s investigations into how these men ended up in Iraq helped launch a decade-long legal battle on behalf of the victims’ families... [he] tells a complex story about how the intersection of privatized wars and globalization heightens the vulnerability of transnational laborers.” — New Yorker

“A modern David vs. Goliath tale that stretches from the towering mountains of Nepal to a courtroom in Texas, showing just how our wars are fought and how the value of a life seems to depend on where someone is born. Cam Simpson has done an incredible job uncovering the trail of international human trafficking that led to a horrific massacre in Iraq. Weaving together interviews from a decade of reporting and tens of thousands of pages of court papers, Simpson has created a compelling narrative that is both a tale of human redemption in the face of crushing grief and a riveting legal thriller.” — Kim Barker, author of The Taliban Shuffle

“In The Girl from Kathmandu, one of America’s most decorated investigative journalists unearths an iconic story of our time: the hidden saga of how American taxpayers funded a corporate pipeline of human labor, from the Himalayas to the battlefield of Iraq.” — Evan Osnos, New Yorker staff writer, winner of the National Book Award and author of Age of Ambition: Chasing Fortune, Truth, and Faith in the New China.

“A powerful, compelling story of how one courageous young Nepali woman challenged the rigid patriarchy of her homeland and a multinational corporation abroad in the pursuit of justice for her murdered husband. Along the way Cam Simpson exposes in vivid detail a lesser known collateral horror of America’s Iraq debacle: how the government and its contractors, in the name of private war and national security, aided and abetted the grotesque modern chain of slave labor. It may renew both your anger at the Iraq war catastrophe and your hope in the rule of law to hold the powerful accountable.” — Eric Westervelt, award-winning former Baghdad and Jerusalem Correspondent NPR News

“The ensuing court battle and Kamala’s personal journey of redemption is a mind-boggling story that champions courage, perseverance, and resilience.” — Booklist

“A powerful work of investigative journalism, one that speaks volumes about the business of war and of human slavery alike.” — Kirkus

Cam Simpson is a London-based writer and journalist. He is currently an international investigations editor and writer for Bloomberg Businessweek magazine and Bloomberg News. He previously worked for the Wall Street Journal, with posts in the Middle East and Washington, and as a Washington-based correspondent for the Chicago Tribune, where he was responsible for covering US foreign policy and investigative projects. Simpson is the recipient of two George Polk Awards, three awards from the Overseas Press Club of America, and numerous other honors.