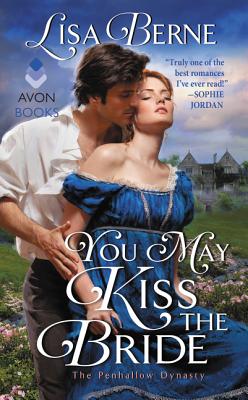 You May Kiss the Bride

A Publishers Weekly Best of the Year Pick!

In an unforgettable debut, Lisa Berne introduces you to the Penhallow Dynasty—men destined to marry, but hesitant to love.

Wealthy and arrogant, Gabriel Penhallow knows it’s time to fulfill his dynastic duty. All he must do is follow “The Penhallow way”—find a biddable bride, produce an heir and a spare, and then live separate lives. It’s worked so well for generations, certainly one kiss with the delectable Livia Stuart isn’t going to change things. Society dictates he marry her, and one chit is as good as another as long as she’s from a decent family.

But Livia’s transformation from an original to a mundane diamond of the first water makes Gabriel realize he desperately wants the woman who somehow provoked him into that kiss. And for all the ladies who’ve thrown themselves at him, it’s the one who wants to flee whom he now wants. But how will he keep this independent miss from flying away?


Praise For You May Kiss the Bride: The Penhallow Dynasty…

“Really fun! Very smart and engaging.” — Megan Frampton, author of Why Do Dukes Fall in Love?

“Prepare to be swept away! Lisa Berne’s sensuous, richly imaginative debut will delight and satisfy you. I savored every page!” — Lenora Bell

“Delicious [...] Berne’s debut is a lingering homage to the heyday of the Regency historical romance — a lovingly crafted story of opposites forced together by society’s censure, quirky side-characters and stolen kisses.” — Sarah MacLean, New York Times bestselling author of The Day of the Duchess

Lisa Berne read her first Georgette Heyer novel at fourteen — it was the effervescent Lady of Quality — and was instantly captivated. Later, she was a graduate student, a grant writer, and a teacher — and now writes historical romance for Avon Books, with her stories set mostly in Regency-era Britain. She lives with her family in the Pacific Northwest.

Please visit Lisa on the web at www.LisaBerne.com . . .  and say hello on Facebook! LisaBerneAuthor