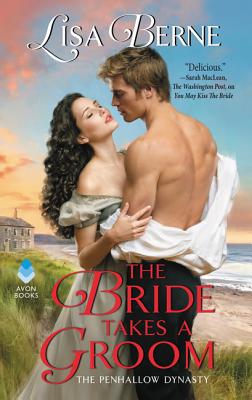 The Bride Takes a Groom

Katherine Brooke may be a fabulously wealthy heiress, but she’s trapped, a pawn in her parents’ ruthless game to marry her into the nobility. Then Captain Hugo Penhallow—so charming, as handsome as a Greek god—comes into her life once more, and suddenly she sees a chance to be free.

As a Penhallow, his is one of the highest names in the land, but still his family is facing ruin. So Katherine boldly proposes an exchange: his name for her money. But only if Hugo understands it’s merely a practical arrangement, and that she’s not surrendering herself entirely.

Back from eight years in America and determined to give his younger siblings a better life, Hugo agrees. He’s never fallen in love, so why not? Yet neither of them guesses that this marriage will become far, far more than they ever dreamed of . . .


Praise For The Bride Takes a Groom: The Penhallow Dynasty…

“Lisa Berne takes all the classic elements of a Regency romance and turns them upside down. The most charming surprise is the hero…who stands out from the legion of Regency leading men before him by being kind.”
— BookPage

“Berne’s light touches of humor (provided by the Penhallow parrot) and realistic dialogue bring the characters and atmosphere of the era to life. There will be a smile on many a reader’s lips by the satisfying HEA.”
— RT Book Reviews

“Now I know which book to bring on a desert island!”
— Fresh Fiction

Lisa Berne read her first Georgette Heyer novel at fourteen — it was the effervescent Lady of Quality — and was instantly captivated. Later, she was a graduate student, a grant writer, and a teacher — and now writes historical romance for Avon Books, with her stories set mostly in Regency-era Britain. She lives with her family in the Pacific Northwest.

Please visit Lisa on the web at www.LisaBerne.com . . .  and say hello on Facebook! LisaBerneAuthor