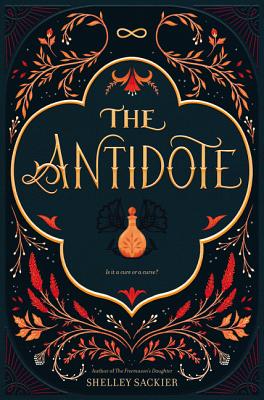 From the author of The Freemason’s Daughter comes a lush romantic fantasy perfect for fans of Everless!

In the world of healers, there is no room for magic.

Fee knows this, just as certainly as she knows that her magic must be kept secret.

But the crown prince Xavi, Fee’s best friend and only source of comfort, is sick. So sick, that Fee can barely contain the magic lying dormant inside her. She could use it, just a little, to heal him. But magic comes at a deadly cost—and attracts those who would seek to snuff it out forever.

A wisp of a spell later, Fee finds herself caught in a whirl of secret motivations and dark pasts, where no one is who—or what—they appear to be. And saving her best friend means delving deeper into the tempting and treacherous world whose call she’s long resisted—uncovering a secret that will change everything.


Praise For The Antidote…

“An intriguing world where magic is taboo and nothing is as it seems… will leave readers hanging in suspense and rooting for a tenacious protagonist.” — ALA Booklist

“An exciting magical mystery that will have you rooting for your favorites and questioning whom you can trust in this vast cast of characters.” — Kirkus Reviews

Praise for The Freemason’s Daughter: “An intriguing exploration of the intersection of politics, religion, and customs of the period—historical fiction at its best.” — Kirkus Reviews (starred review)

“Teens looking for a solid historical romance will not be disappointed in The Freemason’s Daughter... This well-written debut will be enjoyed by readers of  Renee Ahdieh’s Rose and the Dagger series.” — Voice of Youth Advocates (VOYA)

“Fans of Scottish history and subterfuge will be intrigued.” — Bulletin of the Center for Children’s Books

Shelley Sackier is the author of The Antidote, The Freemason's Daughter, and Dear Opl. She blogs at www.shelleysackier.com about food, family, and the folly that is life while living atop a mountain in the Blue Ridge. She also gives school presentations to illuminate the merits of embracing failure (just like NASA) and to further her campaign to erect monuments to all librarians.