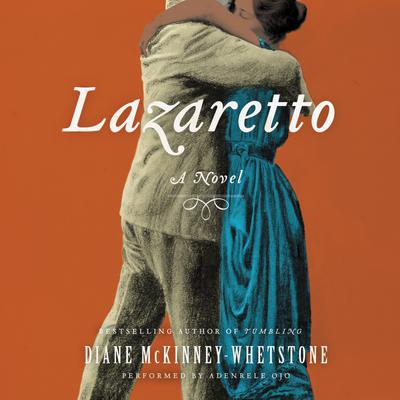 Diane McKinney-Whetstone’s nationally bestselling novel, Tumbling, immersed us into Philadelphia’s black community during the Civil Rights era, and she returns to the city in this new historical novel about a cast of nineteenth-century characters whose colorful lives intersect at the legendary Lazaretto—America’s first quarantine hospital.

Isolated on an island where two rivers meet, the Lazaretto quarantine hospital is the first stop for immigrants who wish to begin new lives in Philadelphia. The Lazaretto’s black live-in staff forge a strong social community, and when one of them receives permission to get married on the island the mood is one of celebration, particularly since the white staff—save the opium-addicted doctor—are given leave for the weekend. On the eve of the ceremony, a gunshot rings out across the river. A white man has fired at a boat carrying the couple’s friends and family to the island, and the captain is injured. His life lies in the hands of Sylvia, the Lazaretto’s head nurse, who is shocked to realize she knows the patient.

Intertwined with the drama unfolding at the Lazaretto are the fates of orphan brothers. When one brother commits a crime to protect the other, he imperils both of their lives—and the consequences ultimately deliver both of them to the Lazaretto.

In this masterful work of historical fiction, Diane McKinney-Whetstone seamlessly transports us to Philadelphia in the aftermath of the Civil War and Lincoln’s assassination, beautifully evoking powerful stories of love, friendship and humanity amid the vibrant black community that flourished amid the troubled times.

Diane McKinney-Whetstone is the author of five acclaimed novels and the recipient of numerous awards, including the American Library Association's Black Caucus Literary Award for Fiction, which she won twice. She teaches fiction writing at the University of Pennsylvania and lives in Philadelphia with her husband, Greg.