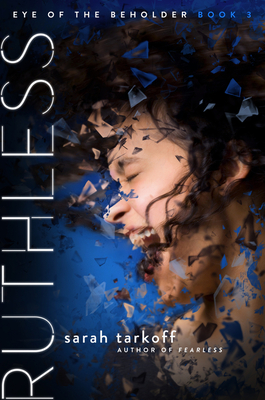 Ruthless (Eye of the Beholder #3) (Paperback)

A brave young woman risks everything to expose a conspiracy controlling her world in this heart-pounding finale to the Eye of the Beholder series, a thrilling sag set in a near-future dystopian society.

Grace Luther grew up believing in the Revelations: the moment when Great Spirit “saved” humanity and transformed the world into a place where pious behavior is rewarded with beauty, and wrongdoing results in ugliness and even death. But at eighteen she learned the truth: the Revelations were a lie meant to manipulate and suppress her society.

Joining the resistance, Grace heroically struck a major blow against the government of the prophets. Now many in the rebellion believe that “Prophet Grace,” is the champion who will lead them to final victory. Grace isn’t so sure. The battle has cost too many lives—including those closest to her. Devastated by all she has seen and endured, she fears she cannot command anyone—much less an entire movement.

As the government’s reign of terror intensifies, rebel after rebel is targeted and killed. Yet there is one last hope. With the future at stake, Grace must overcome her fears to expose and destroy the government’s false prophets forever. Though she has many doubts, there’s one thing she’s certain of: she will lead the rebellion to victory . . . or die trying.

Sarah Tarkoff has written for the CW series Arrow. Other TV writing credits include ABC’s Mistresses, Lifetime’s Witches of East End, and the animated series Vixen and The Ray. She graduated from the University of Southern California with a degree in screenwriting (hence all the screenwriting), and currently lives in Los Angeles. Sinless is her debut novel.
or support indie stores by buying on
Copyright © 2020 American Booksellers Association