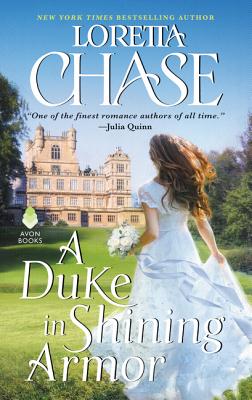 A Duke in Shining Armor

Not all dukes are created equal. Most are upstanding members of Society. And then there’s the trio known as Their Dis-Graces.

Hugh Philemon Ancaster, seventh Duke of Ripley, will never win prizes for virtue. But even he draws the line at running off with his best friend’s bride. All he’s trying to do is recapture the slightly inebriated Lady Olympia Hightower and return her to her intended bridegroom.

For reasons that elude her, bookish, bespectacled Olympia is supposed to marry a gorgeous rake of a duke. The ton is flabbergasted. Her family’s ecstatic. And Olympia? She’s climbing out of a window, bent on a getaway. But tall, dark, and exasperating Ripley is hot on her trail, determined to bring her back to his friend. For once, the world-famous hellion is trying to do the honorable thing.

So why does Olympia have to make it so deliciously difficult for him . . . ?


Praise For A Duke in Shining Armor: Difficult Dukes…

“Chase’s consistent gift is to gently puncture all the genre’s conventions but one: the one that makes you care about her Regency hero and heroine and their happy ever after.”
— New York Times Book Review

“A canny bluestocking virgin and an honorable rakehell duke lead fans on a rollicking escapade in a delectable story that overflows with Chase’s signature lively wordplay, hilarity, and simmering sexual tension. Another riveting read from the unparalleled Chase.”
— Library Journal (starred review)

“Chase is a grande dame of historical romance, and her latest displays the clever plotting and brilliant dialogue for which she’s known... [she] brings a fun blend of quirkiness and wit to a sexy love story that’s both charmingly romantic and laugh-out-loud funny.”

“I should have been able to read A Duke in Shining Armor in a day. Instead, it took me a week. And do you know why? Because I purposely kept putting it down once I realized that eventually I would RUN OUT OF BOOK. How DARE this book be over?”
— Smart Bitches, Trashy Books, ‘A’ Rating

Loretta Chase has worked in academe, retail, and the visual arts, as well as on the streets—as a meter maid—and in video, as a scriptwriter. She might have developed an excitingly checkered career had her spouse not nagged her into writing fiction. Her bestselling historical romances, set in the Regency and Romantic eras of the early nineteenth century, have won a number of awards, including the Romance Writers of America’s RITA®. For more about her past, her books, and what she does and doesn’t do on social media, please visit her at LorettaChase.com.