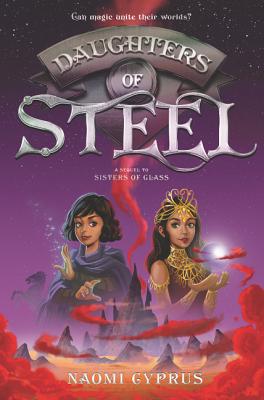 Daughters of Steel (Sisters of Glass #2)

Two girls from two different worlds must unite to save each other in this sequel to the middle grade fantasy Sisters of Glass, which Kirkus declared “will inspire many to find the light within” in a starred review.

Fans of the Descendants novels, the School for Good and Evil series, and Aru Shah and the End of Time will be swept away by this enchanting duology that’s Frozen meets Aladdin.

Halan was once a powerless princess. Now she’s taken her rightful place as queen of the Magi Kingdom—but she wonders if she’ll ever be the ruler her people deserve. And Nalah used to be a powerful pauper. Now she’s the Queen’s Sword—but the more Nalah’s powers grow, the more unruly they become.

One vision changes everything. Nalah embarks on a quest across the desert to harness her powers, while Halan must travel through the Transcendent Mirror to help the Thaumas of New Hadar.

As a dark threat draws closer, can Nalah and Halan reunite to save both worlds—and the future of magic?


Praise For Daughters of Steel (Sisters of Glass #2)…

Praise for Daughters of Steel: ★ “Emphasizing the power of community and trust, fighting through fear, and believing in oneself, [this book] delivers both adventure and satisfying complexity. A thrilling second act filled with faith, determination, and the pursuit of justice.“
— Kirkus Reviews (starred review)

“Cyprus delivers a fast-paced, adventurous story with satisfying moments of quiet self-discovery. Halan and Nalah’s challenges are as much about defeating evil foes as they are about discovering their individual identity and using that knowledge to make difficult decisions. A smart, satisfying sequel.”
— ALA Booklist

Praise for Sisters of Glass: ★ “Cyprus creates two appealing and independent female protagonists; their mirrored worlds are a fresh alternative to familiar medieval Europe-esque fantasylands. A story that will inspire many to find the light within.”
— Kirkus Reviews (starred review)

★ “The Prince and the Pauper is given Arabian Nights flair in this clever retelling that unites magic and adventure. Enchantment, plot twists, and the realization that what you see is not always what you get, make this debut novel inviting and fun.”
— Booklist (starred review)

“Those searching for a new fantasy may want to give this one a try.”
— School Library Journal

Naomi Cyprus is the author of Sisters of Glass and Daughters of Steel. She lives on the beach with her two cats, Pim and Haze. She came up with the idea for Halan’s and Nalah’s worlds while walking on the sand one day, when she imagined that each grain had the potential for magic. Ms. Cyprus loves strong tea and occasionally dyeing her hair blue.
Loading...
or support indie stores by buying on