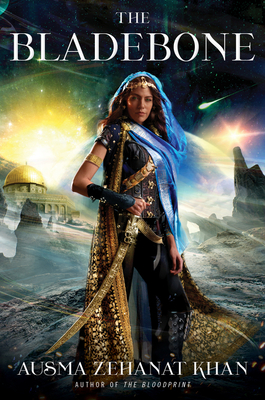 Book Four of the Khorasan Archives

A powerful band of women warriors must face off against an oppressive enemy in one final showdown that will determine their survival and the fate of their world in this concluding volume in Ausma Zehanat Khan's powerful fantasy series—an epic of magic, bravery, adventure, and the fight for freedom that lies "somewhere between N. K. Jemisin and George R. R. Martin" (Saladin Ahmed).

Armed with the powerful sorcery of the Bloodprint and supported by the Talisman, the oppressive One-Eyed Preacher is on the verge of conquering Ashfall, the Black Khan’s capital in the west. Yet not all is lost for Arian, Sinnia and the Council of Hira. If these brave female warriors can uncover the secrets of an ancient magic weapon known as the Bladebone, they can defeat the Preacher and crush his cruel regime.

Neither Arian and Sinnia, nor their allies, the Mages of Khorasan, know the Bladebone’s whereabouts, and not all may survive the search to uncover it. Pursued by a nefarious enemy aligned with the Preacher, they become separated, each following a different path. Then, in their darkest hour, unexpected help appears. But is the Khanum of Black Aura a friend or foe? Arian may discover the answer too late.

When the secret of the Bladebone is finally revealed, the knowledge comes at a devastating price for Arian. As the capital falls, only Hira, home of the Companions, stands in the way of the Preacher’s victory. While the Companions rise to defend their Citadel from enemies outside and within, Arian must face off in a cataclysmic battle with the Preacher that pits the powers of the Bloodprint against the Sana Codex.

For those who survive, Khorasan will never be the same.


Praise For The Bladebone: Book Four of the Khorasan Archives…

"The grand finale to Zehanat Khan’s Khorasan Archives series (after The Blue Eye) resoundingly rounds out the series’ fierce feminist themes...Fantasy fans will savor the luxurious prose and insights into the profundities of love and sacrifice. Bringing such a complex series to a satisfying end is no small feat, and Zehanat Khan pulls it off with grace." — Publishers Weekly (starred review)

"The development of this world and the subsequent changes it undergoes are truly masterful and fascinating to watch play out through Khan's Khorasan Archives series." — Booklist