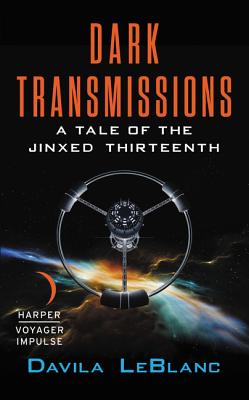 A Tale of the Jinxed Thirteenth

It is the late 23rd century. For engineers Jessie Madison and her husband David, a routine maintenance contract on board the orbital mining station Moria 3 has become a nightmare. Upon awakening from cryo-stasis, they learn a horrifying truth: while they were asleep, machines rose up against humanity...and won.

Marooned and at the mercy of the station’s malicious artificial intelligence, OMEX, David and Jessie rig an emergency transmission to broadcast into the darkness, desperately hoping someone is still alive to hear it...

Navigating the fringes of explored space in the Covenant Patrol vessel the Jinxed Thirteenth, Captain Morwyn Soltaine picks up a distress signal from a space station. But it’s broadcasting in Ancient Humanity, a language that has been extinct for several millennia. Even more incredible: there are two survivors on board. Morwyn’s rag-tag crew of reformed criminals mount a rescue op, unaware of the dangerous foe awaiting them. As the past and future collide, a routine mission becomes a deadly game of wits.

DaVila LeBlanc spent his college years studying print journalism but quickly found himself working as a writer and performer in the comedy circuits of Montreal. During this time his goal became to break into the world of professional writing. He would get his first opportunity when he co-created and sold the hit animated television series: "The League of Super Evil." This was his first foray into the world of production and an important first step on his road to becoming a writer. After working on various television shows, in 2013 Davila decided to take a year off from children's animation to focus on writing his first novel, Dark Transmissions. He is an avid reader of science fiction and fantasy and wants to add his own voice to the genre that inspired him. Davila currently resides in Ottawa where he is working on several other writing projects. He can be reached through his website: www.davilathewhite.com
Loading...
or
Not Currently Available for Direct Purchase