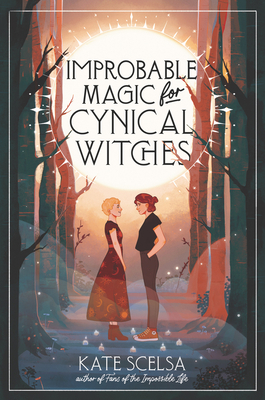 A witchy, atmospheric lesbian contemporary romance set in Salem—from the acclaimed author of Fans of the Impossible Life. Perfect for fans of Nina LaCour and Becky Albertalli.

Seventeen-year-old Eleanor is the last person in Salem to believe in witchcraft—or to think that her life could be transformed by mysterious forces. After losing her best friend and first love, Chloe, Eleanor has spent the past year in a haze, vowing to stay away from anything resembling romance.

But when a handwritten guide to tarot arrives in the mail at the witchy souvenir store where Eleanor works, it seems to bring with it the message that magic is about to enter her life. Cynical Eleanor is quick to dismiss this promise, until real-life witch Pix shows up with an unusual invitation. Inspired by the magic and mystery of the tarot, Eleanor decides to open herself up to Pix and her coven of witches, and even to the possibility of a new romance.

But Eleanor’s complicated history continues to haunt her. She will have to reckon with the old ghosts that threaten to destroy everything, even her chance at new love.

Improbable Magic for Cynical Witches is an atmospheric and romantic coming-of-age about learning to make peace with the past in order to accept the beauty of the present.

“Scelsa explores public opinion and self-perception alongside themes of forgiveness, relational toxicity, and commercialism. Symbolic magic lends an underlying sense of enchantment as Eleanor opens herself up to new ideas and possibilities, and a sweet, gentle central chemistry sells the central romance.” — Publishers Weekly (starred review)

“In Salem, everyone has secrets, and two teenagers struggle to keep their fledgling relationship alive through Eleanor’s past, and Pix’s best intentions in this charming, heartrending LGBTQIA+ YA.” — School Library Journal (starred review)

“Cleverly arranged as a journey through the Major Arcana of a tarot deck, this is a queer romance [with] a witchy flourish.” — ALA Booklist

Kate Scelsa is a novelist, playwright, and part time witch. Her debut novel Fans of the Impossible Life was an Indie Next pick, a Rainbow List Top Ten book, and has been published in ten languages. Her play Everyone's Fine With Virginia Woolf has been produced in New York, Dublin, and was published by Dramatists Play Service. Kate’s identity as a witch can be traced back to second grade, when she founded her first coven. These days her witchy activities include reading tarot from the (only slightly) haunted house in upstate New York that she shares with her wife, and writing songs and performing with her band The Witch Ones.