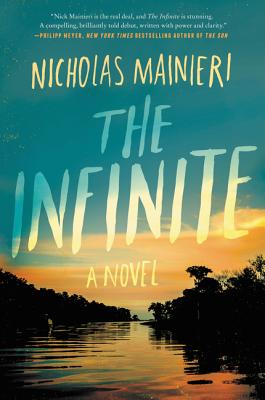 In this suspenseful, tender, and completely absorbing debut set in a perilous post-Katrina New Orleans and cartel-plagued Mexico, two teenagers discover a temporary haven in each other.

“The Infinite is that rare, beautiful first novel, so contemporary and yet as timeless as first love itself. And Nick Mainieri does what great novelists do with their first great works. He creates unforgettable characters in young lovers Jonah and Luz who, both together and alone, navigate the rushing river of the borderlands that mark our two Americas. The Infinite is a heart song, and Nicholas Mainieri is one of our next great storytellers.”—Joseph Boyden, author of The Orenda and Three Day Road

Jonah McBee has deep roots in New Orleans, but with hardly any family left, he half-heartedly is planning to enlist in the army after high school. Luz Hidalgo, an undocumented Latina and budding track star, followed her father there after Hurricane Katrina. Both have known loss. Both are struggling to imagine a new future. And when Jonah and Luz fall in love, it is intense, addictive, and real.

But everything changes when Luz discovers that she’s pregnant. In a moment of panic, her father sends Luz back to Mexico so her grandmother can help raise the baby. Devastated, Jonah decides to take a road trip with his best friend when he doesn’t hear from her.

Little does Jonah know, Luz is fighting for her life. Her trip has been cut short by a shocking act of violence, thrusting her into the endless cycle of bloodshed perpetrated by the cartels. So Luz does what she does best: She runs. And she goes farther and deeper than she ever imagined.

A breathtaking portrait of post-Katrina New Orleans and a riveting descent into Mexico’s drug war, The Infinite is an utterly unique debut novel about the borders that divide us—and the truths that unite us.


Praise For The Infinite: A Novel…

“Mainieri’s propulsive debut is a double coming-of-age story that spans the border . . .[He] is ever sincere, eager to show how borders carve up land and families.”
— New York Times Book Review

“New Orleans-based Mainieri crafts both characters with striking lucidity, yet portrays Luz’s journey—fraught with drug lords, shoot-outs, and loss—with sincerity and compassion…A unique iteration of the coming-of-age story and a politically urgent read, The Infinite dares to unearth the logic that induces violence in communities internationally while challenging monolithic depictions of violence-ridden Mexico.”
— Los Angeles Review of Books

“[An] engrossing debut about finding one’s place in the world...Mainieri’s novel is a pertinent dissection of place, class, roots, and identity.”
— Publishers Weekly

“Mainieri presents a striking tale of two resilient and resourceful young adults as they set their sights on a tenuous future.”
— Booklist

“Part of the joy of reading is coming across a marvelous book by a terrific new talent. In my particular case, my personal joy has no boundaries as the result of a close encounter of a literary kind with a debut novel titled THE INFINITE by Nicholas Mainieri. It is sure to be hailed an instant classic . . . Mainieri reminds me by turns of Cormac McCarthy, John Steinbeck and (the late, sorely missed and nearly irreplaceable) Larry Brown.”
— BookReporter.com

“Nick Mainieri is the real deal, and The Infinite is stunning. A compelling, brilliantly-told debut, written with power and clarity.”
— Philipp Meyer, New York Times Bestselling author of The Son

“With a sharp eye for detail and careful, generous prose, Mainieri conjures whole worlds with a few words, taking the reader on a thrilling, heartbreaking journey. The Infinite is a sparkling debut, a novel that seems to guarantee you’ll be hearing Mainieri’s name mentioned in the same breath as contemporary masters like Denis Johnson and Cormac McCarthy.”
— Ron Currie, Jr., author of Flimsy Little Plastic Miracles and Everything Matters!

“The Infinite is a surprising novel of border crossings and desperate violence, of young love and hardship, of adventure and identity, of bravery and the lack thereof. It also introduces us to one of the more complicated and capable heroines I’ve come across in a long time; the beautifully scrappy and haunted Luz Hidalgo, who you do not want to back into a corner. I flew through this book, half hopeful and half terrified of what was coming next. This is a powerful and propulsive read. Highly recommended.”
— M.O. Walsh, New York Times bestselling author of My Sunshine Away

The Infinite is that rare, beautiful first novel, so contemporary and yet as timeless as first love itself. And Nick Mainieri does what great novelists do with their first great works. He creates unforgettable characters in young lovers Jonah and Luz who, both together and alone, navigate the rushing river of the borderlands that mark our two Americas. The Infinite is a heart song, and Nicholas Mainieri is one of our next great storytellers.
— Joseph Boyden, Scotiabank Giller Prize Winning author of Three Day Road, Through Black Spruce, and The Orenda

“The title of Nick Mainieri’s wonderful debut novel is perfectly apt. The Infinite takes the reader on a heart-pounding, heart-rending adventure through the infinite complexities of being alive in the world today. Part City of Refuge, part Breaking Bad, this novel takes you by the hand and won’t let go. I couldn’t put it down, and I can’t stop thinking about it since finishing. The writing is smart, beautiful, and unafraid to ask the big questions. This is fiction that stays with you and heralds the beginning of a wonderful career.”
— Andrew Malan Milward, author of I Was A Revolutionary

“Nicholas Mainieri has written a profound and sensitive novel about the ways in which disasters, both natural and unnatural, can all too often make us who we are. The star-crossed love story at its heart makes The Infinite an unforgettable debut that also happens to be impossible to put down. It has all the makings of an American classic.”
— Andrew Ervin, author of Burning Down George Orwell's House

“Spanning northern Mexico and the Gulf South, The Infinite is an entirely modern western, with a visceral sense of place and an ear for the small anxieties that shape our most courageous actions. In this tale of borders–national, familial, psychological–Luz and Jonah are more than just teenagers in love; haunted by their pasts and grasping for an uncertain future, they guide us through swampland, desert scrub, high school hallways, and a sicario’s hideout. This is a thriller with heart, a romance on the run, and a manifesto for our increasingly tenuous landscape.”
— Katy Simpson Smith, author of The Story of Land and Sea and Free Men

Nicholas Mainieri’s short fiction has appeared in the Southern Review, Southern Humanities Review, and Salamander, among other literary magazines. He lives in New Orleans with his wife and son. The Infinite is his first novel.