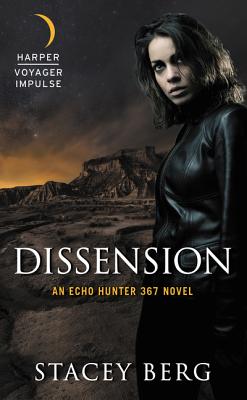 For four hundred years, the Church has led the remnants of humanity as they struggle for survival in the last inhabited city. Echo Hunter 367 is exactly what the Church created her to be: loyal, obedient, lethal. A clone who shouldn’t care about anything but her duty. Who shouldn’t be able to.

When rebellious citizens challenge the Church’s authority, it is Echo’s duty to hunt them down before civil war can tumble the city back into the dark. But Echo hides a deadly secret: doubt. And when Echo’s mission leads her to Lia, a rebel leader who has a secret of her own, Echo is forced to face that doubt. For Lia holds the key to the city’s survival, and Echo must choose between the woman she loves and the purpose she was born to fulfill.

“Berg’s promising debut, the first of a planned duology, stars a conflicted heroine who must fight for what she believes in and make a terrible choice. This intriguing story will have readers eager to pick up the second volume.” — Publishers Weekly on DISSENSION

“If you liked Solitaire or Dangerous Space, I think you’ll like Dissension. I feel like Stacey is a sister explorer of the same human territory that fascinates me. This book has made me laugh, and weep, every time I’ve read it.” — Kelley Eskridge on DISSENSION

Stacey Berg is a medical researcher who writes speculative fiction. Her work as a physician-scientist provides the inspiration for many of her stories. She lives with her wife in Houston and is a member of the Writers’ League of Texas. When she’s not writing, she practices kung fu and runs half marathons.