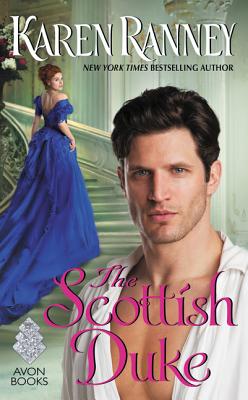 New York Times bestselling author Karen Ranney returns with the first novel in a new series about dashing, charismatic dukes—and the women who tame them…

Though raised as a gentleman’s daughter, Lorna Gordon is obliged to take a position as an upstairs maid at Blackhall Castle when her father dies. Alex Russell, the Duke of Kinross, is the most tempting man she’s ever seen—and completely unattainable—until, at a fancy dress ball, Lorna disguises herself as Marie Antoinette and pursues an illicit tryst…with scandalous consequences.

Months after his mysterious seductress disappears, Alex encounters her again. Far from the schemer the distrustful duke assumed her to be, Lorna is fiercely independent and resourceful. She’s the one woman capable of piercing his defenses. But when danger threatens Lorna, Alex must prove himself not just the lover of her fantasies, but the man who will fight to protect her.


Praise For The Scottish Duke…

“a riveting fairy tale story in a beautiful castle in the Scottish Highlands [...] The development of their romance is intense and captivating [...] This promising series inception is sure to garner attention from fans of historicals”
— Publishers Weekly (starred review)

“Ranney has created a unique and enchanting riff on the age-old Cinderella tale. Readers who can’t get enough of hunky Highland heroes will love this enticing tale.”
— Booklist (starred review)

“Ranney infuses her story with depth of emotions and sensuality. A definite read for Ranney fans.”
— RT Book Reviews