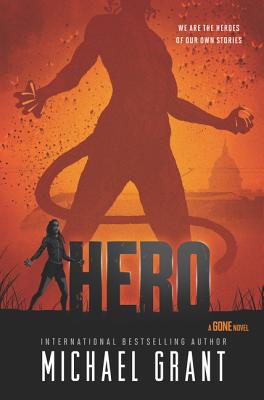 The mind-blowing conclusion to the Monster trilogy and the final installment in the Gone series from science fiction and fantasy master Michael Grant is perfect for superhero and Stephen King fans alike.

After the fall of Perdido Beach dome, a new set of humans developed mutant powers from the rock infected with alien virus. They are the Rockborn Gang: Dekka, Shade, Cruz, Malik, Armo, and Francis. With their superpowers, they have defended the earth from other rockborn who used their powers for evil, like Dillon Poe.

When another rock carrying the virus strikes New York, a new foe, Bob Markovic, rises with a horrifying and nearly unstoppable ability. Markovic’s unending ambition and lack of a moral compass made him unbearable before the virus. And that was before he was a swarm of plague-ridden insects, with the power and means to take over the city—and maybe the world.

As the Rockborn Gang try to defeat their latest villain, they will find themselves on morally gray grounds and have to make tough decisions if they want to save the world.

In this pulse-pounding finale to the saga more than ten years in the making, Michael Grant delivers an unforgettable conclusion while asking: What does it take to be a hero?

“Ratchets up the gore and action, and features a diverse cast of characters. An evocative, intricately plotted companion series.” –ALA Booklist

Praise for MONSTER: “Fans of this very popular series will no doubt clamor for this most recent addition.”

“New characters and old favorites abound in this follow-up. The cast is fairly diverse, covering a wide variety of skin colors, sexual orientations, and gender identities. Longtime fans will surely be excited by the novel’s final moments. A bombastic, engaging start to a sequel series full of potential.”

“Grant’s modern take on the Dr. Jekyll and Mr. Hyde narrative ratchets up the gore and action, and features a diverse cast of characters...[An] evocative, intricately plotted companion series that delves into similar issues of bioethics and gray areas of morality.”

Praise for GONE: ”This intense, marvelously plotted, paced, and characterized story will immediately garner comparisons to Lord of the Flies or even the long-playing world shifts of Stephen King, with just a dash of X-Men for good measure.”

Praise for HUNGER: “The tension starts in the first chapter and does not let up until the end The story is prgressing with smart plot twists, both in actions and emotions.”

Praise for LIES: “Disturbing, brilliantly plotted, and boasting a balanced mix of action and scheming.”
— Booklist

Praise for PLAGUE: “Grant’s science fantasy thrillers continue to be the very definition of a page-turner.”

Praise for LIGHT: “As a series finale, this book is more than satisfying-it is epic.”
— Voice of Youth Advocates (VOYA) (starred review)