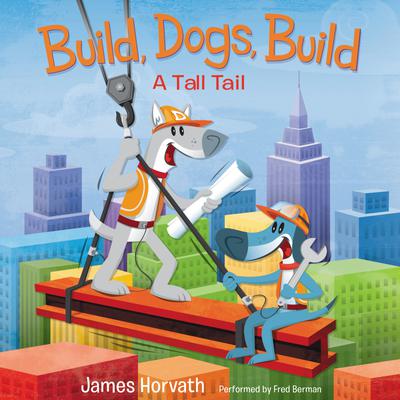 Beginning readers will love this I Can Read adventure starring a doggy construction crew, gently adapted from James Horvath’s popular picture book of the same title.

Top dog Duke and his crew of construction-worker dogs are ready to knock down an old building and build up a shiny new one. With cranes, bulldozers, dump trucks, and cement mixers all on the job, these busy dogs have a lot to do. Will they finish the new building in time?

Build, Dogs, Build is a Level One I Can Read book, which means it’s perfect for children learning to sound out words and sentences.

James Horvath is the author-illustrator of two more picture books starring Duke and his construction crew: Build, Dogs, Build and Dig, Dogs, Dig, which the New York Times said "hops along with the bouncy effervescence of P. D. Eastman's Go, Dogs, Go!" He has worked as a designer and illustrator for more than fifteen years. In 2002, he established Jamestoons Studios (with a workforce of one) so he could focus more on his illustration. When not scratching and scribbling at his drawing table, he plays with his two young sons and wife, bangs around on the banjo, surfs, and generally has a lot of fun. A lifelong devoted cartoon fan, James Horvath lives with his family on California's central coast.