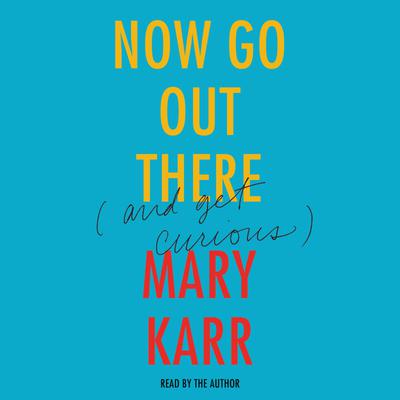 Now Go Out There (Digital Audiobook)

A celebration of curiosity, compassion, and the surprising power of fear, based on the New York Times bestselling author and renowned professor’s 2015 commencement address at Syracuse University.

“Being smart and rich are lucky, but being curious & compassionate will save your ass.”

Every year there are one or two commencement speeches that strike a chord with audiences far greater than the student bodies for which they are intended. In 2015 Mary Karr’s speech to the graduating class of Syracuse University caught fire, hailed across the Internet as one of the most memorable in recent years, and lighting up the Twittersphere.

In Now Go Out There, Karr explains why having your heart broken is just as—if not more—important than falling in love; why getting what you want often scares you more than not getting it; how those experiences that appear to be the worst cannot be so easily categorized; and how to cope with the setbacks that inevitably befall all of us. “Don’t make the mistake of comparing your twisted up insides to other people’s blow-dried outsides,” she cautions. “Even the most privileged person in this stadium suffers the torments of the damned just going about the business of being human.”

An ideal—and beautifully designed—gift for a graduate or for anyone looking for some down-to-earth life advice, Now Go Out There is destined to become a classic.

Mary Karr is the author of three award-winning, bestselling memoirs: The Liars’ Club, which was a finalist for the National Book Critics Circle Award; Cherry, which was selected as a “notable book” by book reviews nationwide; and Lit, which was one of the New York Times Book Review’s Ten Best Books of the Year (and made virtually every other Best of the Year list) and a National Book Critics Circle Award finalist. A Guggenheim Fellow in poetry, Karr has won Pushcart Prizes for both verse and essays. She is the Peck Professor of Literature at Syracuse University.