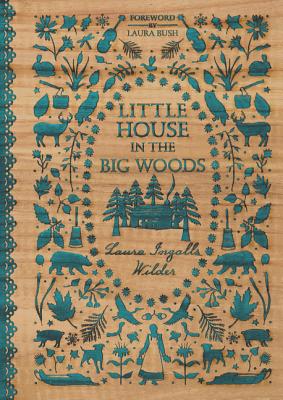 Revisit one of the most beloved books in Laura Ingalls Wilder’s classic Little House series with this gorgeous hardcover, unjacketed edition of Little House in the Big Woods, featuring a special foreword from Laura Bush, all-new iconic cover art, and no interior art.

This beloved story of a pioneer girl and her family begins in 1871 in a log cabin on the edge of the Big Woods of Wisconsin. Laura lives in the little house with her pa, her ma, her sisters Mary and Carrie, and their dog, Jack. Pioneer life is sometimes hard for the family, but it is also exciting as they make their own homemade toys and treats, do the spring planting, bring in the harvest, and visit town. And every night Laura and her family are safe and warm in their little house, with the happy sound of Pa’s fiddle to send them off to sleep.

Based on the real-life adventures of Laura Ingalls Wilder, Little House in the Big Woods is the first book in the award-winning Little House series, which has captivated generations of readers with its depiction of life on the American frontier.