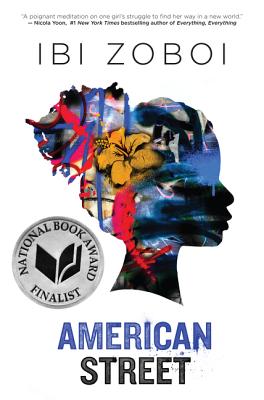 “American Street left me absolutely breathless. Ibi Zoboi has written a story about family, first love, and the crossroads of faith and hope. Through the lens of Zoboi’s gorgeous prose, Fabiola’s voice soars as she struggles to make sense of her new life, longs to be reunited with her mother, and finds herself faced with an impossible choice. This is YA at its very best: aching, revealing, and so true it hurts.”
— Stephanie Appell, Parnassus Books, Nashville, TN
View the List

In this stunning debut novel, Pushcart-nominated author Ibi Zoboi draws on her own experience as a young Haitian immigrant, infusing this lyrical exploration of America with magical realism and vodou culture.

But after they leave Port-au-Prince, Haiti, Fabiola’s mother is detained by U.S. immigration, leaving Fabiola to navigate her loud American cousins, Chantal, Donna, and Princess; the grittiness of Detroit’s west side; a new school; and a surprising romance, all on her own.

Just as she finds her footing in this strange new world, a dangerous proposition presents itself, and Fabiola soon realizes that freedom comes at a cost. Trapped at the crossroads of an impossible choice, will she pay the price for the American dream?

★ “Mixing gritty street life with the tenderness of first love, Haitian Vodou, and family bonds, the book is at once chilling, evocative, and reaffirming.” — Publishers Weekly (starred review)

★ “Filling her pages with magic, humanity, tragedy, and hope, Zoboi builds up, takes apart, and then rebuilds an unforgettable story. This book will take root in readers’ hearts.” — Kirkus Reviews (starred review)

“Will reach young readers regardless of their background.” — Bulletin of the Center for Children’s Books (starred review)

★ “A breathtaking story about contemporary America that will serve as a mirror to some and a window for others, and it will stay with anyone who reads it.” — School Library Journal (starred review)

“A poignant meditation on one girl’s struggle to find her way in a new world.” — Nicola Yoon, bestselling author of EVERYTHING, EVERYTHING.

“Brimming with culture, magic, warmth, and unabashed rawness, “American Street” is ultimately a blistering tale of humanity. This is “Manchild in the Promised Land,” for a new generation, and a remarkable debut from Zoboi, who without question is an inevitable force in storytelling.” — Jason Reynolds, award-winning co-author of ALL AMERICAN BOYS

“Zoboi’s nascent storytelling gifts ensnare from page one. To this spellbinding voice of the next generation, I bow.” — Rita Williams-Garcia, New York Times bestselling author and three-time winner of the Coretta Scott King Award

“Following in the footsteps of Edwidge Danticat, Zoboi’s young adult debut is equal parts gritty and transcendent.” — The Horn Book

“A refreshing take on a common literary preoccupation, the American dream...fascinating and beautiful.” — Vox

1. How does the author use Creole and American slang throughout the book? What does the use of either or both languages suggest about the characters in the novel?

2. What are some of the similarities between Detroit, Michigan and Port-au-Prince, Haiti? How do they differ?

3. How do you think Fabiola changes over the course of the novel? What were some of the events that facilitated those changes?

4. How would you describe the Three Bees? Which one of their characters would you most identify with and why?

5. What does Fabiola mean when she says “Now I don’t look so … Haitian. So immigrant.” How would the Three Bees interpret those words? What are some examples of when Fabiola feels like she isn’t only Haitian but she’s not fully Americanized either?

6. How did you feel about Kasim when you first met him? Did you trust him? What about Dray? How were Kasim and Dray the same? How were they different?

7. Describe the different forms of fighting that take place throughout the novel. What are the various reasons that the characters are involved in fighting? Do you think they have a choice about if they would want to fight or back down? Why or why not?

8. Describe what happens at the party in Gross Pointe Park. How would you react in that situation? Would you have trusted Detective Stevens? Why or why not?

9. Magical realism combines realistic narrative and naturalistic technique with surreal elements of dream or fantasy. How does this enhance Fabiola’s spirituality throughout the book?

10. Explain the significance of this quote: “But then I realize that everyone is climbing their own mountain here in America. They are tall and mighty and they live in the hearts and everyday lives of the people.”