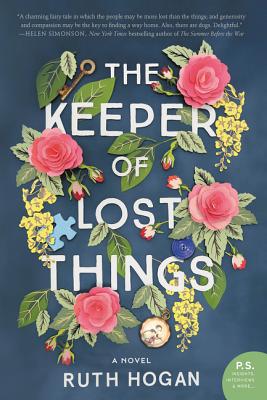 The Keeper of Lost Things

Full of character, wit, and wisdom, The Keeper of Lost Things is heartwarming tale that will enchant fans of The Particular Sadness of Lemon Cake, Garden Spells, Mrs Queen Takes the Train, and The Silver Linings Playbook.

Anthony Peardew is the keeper of lost things. Forty years ago, he carelessly lost a keepsake from his beloved fiancée, Therese. That very same day, she died unexpectedly. Brokenhearted, Anthony sought consolation in rescuing lost objects—the things others have dropped, misplaced, or accidently left behind—and writing stories about them. Now, in the twilight of his life, Anthony worries that he has not fully discharged his duty to reconcile all the lost things with their owners. As the end nears, he bequeaths his secret life’s mission to his unsuspecting assistant, Laura, leaving her his house and and all its lost treasures, including an irritable ghost.

Recovering from a bad divorce, Laura, in some ways, is one of Anthony’s lost things. But when the lonely woman moves into his mansion, her life begins to change. She finds a new friend in the neighbor’s quirky daughter, Sunshine, and a welcome distraction in Freddy, the rugged gardener. As the dark cloud engulfing her lifts, Laura, accompanied by her new companions, sets out to realize Anthony’s last wish: reuniting his cherished lost objects with their owners.

Long ago, Eunice found a trinket on the London pavement and kept it through the years. Now, with her own end drawing near, she has lost something precious—a tragic twist of fate that forces her to break a promise she once made.

As the Keeper of Lost Objects, Laura holds the key to Anthony and Eunice’s redemption. But can she unlock the past and make the connections that will lay their spirits to rest?

A charming, clever, and quietly moving novel of of endless possibilities and joyful discoveries that explores the promises we make and break, losing and finding ourselves, the objects that hold magic and meaning for our lives, and the surprising connections that bind us.


Praise For The Keeper of Lost Things: A Novel…

“From the attention-grabbing opening paragraph, to the joyful conclusion, Ruth Hogan has stirred together a charming fairytale in which the people may be more lost than the things; and generosity and compassion may be the key to finding a way home. Also there are dogs. Delightful.” — Helen Simonson, author of The Summer Before the War and Major Pettigrew's Last Stand

“A beautiful story of love, loss, and the redemptive power of friendship.” — Catherine Hall, author of The Proof of Love

“Hogan’s writing has the soothing warmth of the cups of cocoa and tea her characters regularly dispense…old-fashioned storytelling with a sprinkling of magic.” — Kirkus

“Hogan’s first novel reveals how even discarded items have significance and seemingly random objects, people, and places are all interconnected.” — Booklist

Ruth Hogan describes herself as a “rapacious reader, writer, and incorrigible magpie” whose own love of small treasures and curiosities and the people around her inspired her first novel. She lives north of London.