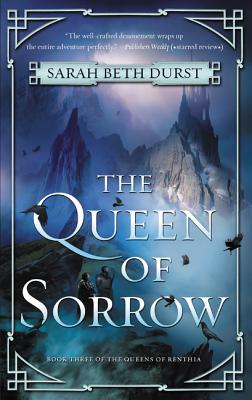 The battle between vicious spirits and strong-willed queens that started in the award-winning The Queen of Blood and continued in the stunning The Reluctant Queen comes to a gripping conclusion in the final volume of Sarah Beth Durst’s Queens of Renthia trilogy . . .

But then Naelin’s children are kidnapped by spirits.

Naelin would rather watch the world burn than see her children harmed—and she is ready to start a war with the north to secure their return.

But defeated Queen Merecot of Semo has grander plans than a bloody battle with her southern neighbors. Taking the children is merely one step in a plot to change the future of all Renthia, either by ending the threat of spirits once and for all . . . or by plunging the world into chaos.


Praise For The Queen of Sorrow: Book Three of the Queens of Renthia…

“Durst brings her lavish saga to an emotional and breathtaking end, as this eic tale continues to thrill and enchant until the very last page.”
— RT Book Reviews

“The Queens of Renthia series [...] concludes with an earth-shattering conflict between three determined queens, two countries, and a multitude of bloodthirsty spirits.”
— Booklist (starred review)

“Ms. Durst has given us a refeshing, provocative and ultimately convincing remake of modern fantasy conventions. The wonder is that we ever saw things the other way around.”
— Wall Street Journal

“The Queen of Sorrow is [...] filled with intricate battles, a lot of action, intriguing strategies, and an entertaining story. The amazing fantasy characters remain true to themselves.”
— Washington Book Review

“I will gladly read any and all books she chooses to write about this wonderful, imaginative world. Highly recommended.”
— Fantasy Literature, 4-1/2 stars

“With a story focused on powerful women and worldbuilding worthy of Guy Gavriel Kay, this series has been a dark delight.”
— B&N Sci-Fi and Fantasy Blog

“The Queen of Sorrow is an excellent finale to the trilogy [...] The Queens of Renthia is a must-read of the genre. Highly Recommended.”
— SFFWorld

“If you’re looking for a high-fantasy series that has a very character-driven plot and will keep you interested and engaged, pick up these books! They’re full of magic, mayhem, and emotion.”
— Kid’s BookBuzz