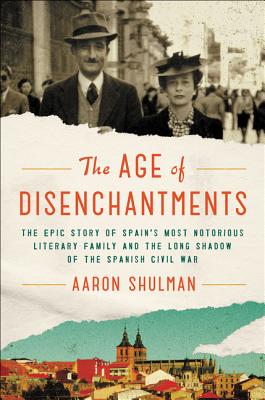 The Age of Disenchantments

A gripping narrative history of Spain’s most brilliant and troubled literary family—a tale about the making of art, myth, and legacy—set against the upheaval of the Spanish Civil War and beyond

In this absorbing and atmospheric historical narrative, journalist Aaron Shulman takes us deeply into the circumstances surrounding the Spanish Civil War through the lives, loves, and poetry of the Paneros, Spain’s most compelling and eccentric family, whose lives intersected memorably with many of the most storied figures in the art, literature, and politics of the time—from Neruda to Salvador Dalí, from Ava Gardner to Pablo Picasso to Roberto Bolaño.

Weaving memoir with cultural history and biography, and brought together with vivid storytelling and striking images, The Age of Disenchantments sheds new light on the romance and intellectual ferment of the era while revealing the profound and enduring devastation of the war, the Franco dictatorship, and the country’s transition to democracy.

A searing tale of love and hatred, art and ambition, and freedom and oppression, The Age of Disenchantments is a chronicle of a family who modeled their lives (and deaths) on the works of art that most inspired and obsessed them and who, in turn, profoundly affected the culture and society around them.


Praise For The Age of Disenchantments: The Epic Story of Spain's Most Notorious Literary Family and the Long Shadow of the Spanish Civil War…

“A fascinating account...In Shulman’s hands, the story of the gifted, doomed Paneros becomes an absorbing rumination on loyalty and betrayal, history and myth, literature and pretense, on the nature of family, and of memory itself. A remarkable book, and a compulsive read.” — Jon Lee Anderson, author of The Fall of Baghdad and Che Guevara: A Revolutionary Life

“Betrayal and sacrifice, passion and poetry, the fate of a country if not a continent, epic destruction—all is in play in this sweeping yet intimate account. Yet what makes this book so truly rich and resonant is Shulman’s ability to expose the core humanity that underlies the entire saga.” — Mark Eisner, author of Neruda: The Biography of a Poet

“A deeply researched portrait...Spain’s roiling history, beginning in the 1930s, forms the backdrop to the family’s turmoil. A richly detailed history.” — Kirkus Reviews

“At its heart, this book is about the soul of Spain. The lives of the Paneros—poets, writers, brothers, lovers, and rivals—roiled and rhymed with the revolutions and counterrevolutions of a nation in search of itself. As richly and intimately drawn as the characters might have drawn themselves.” — Joe Hagan, author of Sticky Fingers: The Life and Times of Jann Wenner and Rolling Stone Magazine

“[Shulman] revives the complex, passionate, and faded, Grey Gardens–like landscape of the Spanish past, and, thanks to his deep love for Spain, readers will be enchanted with the journeys he shares.” — Soledad Fox Maura, professor of Spanish and comparative literature, Williams College, and author of Exile, Writer, Soldier, Spy: Jorge Semprún

“A mythic saga of artists passionately believing that they were shaping the world only to be utterly re-made by it. Read The Age of Disenchantments now before we are all binge-watching it on Netflix.” — Jack Hitt, author of Off the Road: A Modern-Day Walk Down the Pilgrim’s Route into Spain

“[An] intriguing narrative of literary ambition and family dysfunction—betrayal, drug addiction and madness—that begins during the Spanish Civil War and continues into this century.”  — New York Times Book Review

“This book adds to a smaller body of literature on the intellectuals who chose survival over principles...Examining Panero’s output and his relationships, Shulman reconstructs the arc of a man who saw literature as both craft and escape.”  — New Yorker

“...Part biography, part political history...A portrait of an earlier Spain...when poets were widely loved and celebrated and as a young visitor to the Paneros’ house put it, ‘all the young people were drunk with hope and poetry.” — Wall Street Journal

“Shulman’s narrative blends the personal and the political, and raises timely questions...The Age of Disenchantments has something important to show us about the urgency of history and our agency within it.”  — Los Angeles Book Review

“The book reads as so many squiggling lines of startling connections, a grave revisiting of the horrors of the [Spanish] Civil War, and as genuine wonder and appreciation for a singular family. The way the Paneros moved, changed, decayed, and ended is astonishing.”  — Full Stop

“Shulman is able to bring to life the Panero family’s heartache and the Spanish Civil War’s devastation as only a trained journalist can... The resulting work avoids a dry historical retelling of the War, instead, weaving a narrative story that piques even non-historians’ interest.”  — San Francisco Book Review

Aaron Shulman is a journalist whose work has appeared in publications including The Believer, The American Scholar, The New Republic, and The Los Angeles Review of Books. A collaborative writer and editorial coach, he works with visionary scientists and thinkers to bring their research to a wide readership. Shulman first lived in Spain while studying abroad and moved back in 2010 after falling in love with a Spanish woman. There, he published pieces about Spanish culture, social movements, and the economic crisis. In 2012, he watched “El Desencanto,” the 1976 documentary about the Panero family, and from that night onward became hopelessly obsessed. He now lives in Santa Barbara, California.